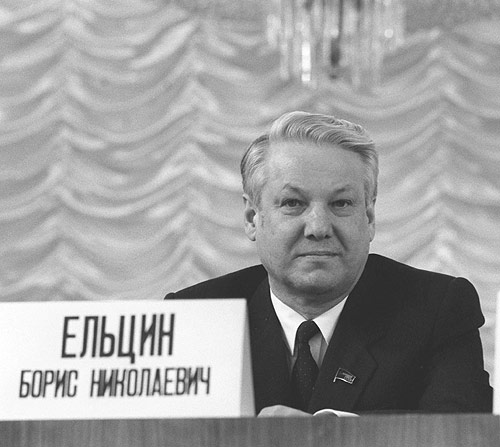 The chairman of Herus e.V. (Hessen- Russian intercultural exchange and humanitarian help) Dr. Alexander de Faria e Castro gave a presentation in Wiesbaden end of April, in which he presented his personal insight about the period when he was active as a lawyer and consultant in Russia and the US. During the 80ies and 90ies he was active for different investor groups in the US; in the beginning 90ies he became active in particular for German medium sized enterprises, for example in behalf of the Ehrmann AG in Russia. In 1995 Dr. de Faria was appointed by the Russian government – Russian Fund for Federal Assets (comparable to the German Treuhandanstalt [Trust agency]) – as official representative for privatization questions in Germany and the EU.

Looking back to this period and in view of the actual situation, de Faria in his presentation called for a more balanced judgement concerning the actual Russia- Ukraine conflict. He underlined that in today’s strategic debate one should not be exclusively influenced by the dictum of the Atlanticists, largely dominated by the US. What is necessary instead is a rethinking about essential foreign policy principles such as the principles which were followed by German Reichskanzler Otto von Bismarck (1815-1898) and recently referred to again by former SPD Chancellor Gerhard Schröder.

During his speech de Faria pointed to an interview which the German weekly magazine Der Spiegel had made with Gerhard Schröder on 28th of March this year. In the interview Schröder attacked the NATO policy of strategic encirclement of Russia at the end of the Cold War, which in turn  provoked very sensitive reactions on the Russian side. In respect to the “divergence” between US and Europe, Schröder stated in the interview, that “there are no common interests of the West. The Americans see the conflict with Russia as a global problem. They don’t want a new competitor aside China. The Europeans know from historical experience, that they were doing well when there was a balanced policy with Russia and it always became difficult when that balance was lacking. This was also understood by Bismarck.” Speaking about the incredible mistakes which were made by the EU (in particular by EU Commission President José M. Barroso) Schröder said: “We have a common interest that there is not a collapsing but a strong Russia (…) Europe especially Germany needs Russia and Russia needs Europe. This fact hasn’t changed since the days of Otto von Bismarck.”

In the biography of de Faria e Castro there are ancestors who came from Russia – some of them high-ranking personalities; his family includes ancestors from the Baltic and from Sweden. He speaks fluently Russian and wrote his doctoral thesis in comparative law on particular topics concerning “Russian and German civil law”. Since the end of the 1960ies he was active as lawyer in the US: as consultant for German owner companies of the former Charter airline Atlantis, he negotiated with Mac Donald Douglas about the acquirement of two wide-body aircrafts and he also negotiated for German investment companies treaties with Warner Brothers and Universal.

In his presentation De Faria emphasized that during his stay in the US he learned to appreciate many things: This includes the principle of the American constitution as well as the art of “executive summary” which is practiced by leading managers. On the other side he felt very concerned during his stay in the US about the way in which the American society and politics dealt with the black minority; the policy of racial discrimination which up to this day has its influence on the American society.  He was also shocked about the so called American fundamentalist “Christian Right” which aside its immense influence on the media and being known as “Pro-Israel Lobby” stands for a very one sided policy in respect to the Mideast, as was documented by its lobbying in organizing the recent visit of Minister President Netanyahu to the US and his speech in front of the American Congress.

As a US insider de Faria judges that today the US does not act “according to its own principles and values”. In his view instead of orienting along the Common Good, the country has broken international law several times and shown disrespect for the inviolability of sovereign borders.

From beginning of the 90ies de Faria became active in Russia. He received a mandate by a big American law firm in Moscow. During this period he wrote several articles which were published in the Russian and German press. The articles talked about the importance and necessity to promote medium sized firms in Russia, in which the West should be instrumental.

On behalf of the Hessian Ministry of Economy de Faria founded a “German Russian Economic Business Association” which was however dissolved at the end of the Soviet Union. After the Gorbachevs failed attempt to successfully push through the policy of Perestroika, Jelzin came to power in the year 1991. What began under his term was a fundamental change: the end of the Soviet Union, the founding of the Russian Federation and the beginning of an era of economic politics which began to introduce “predatory capitalism” that went out of control.

As the German weekly magazine “Der Spiegel” wrote in a review in 1998, Jelzin introduced a “Russian style predatory capitalism.” “He decided against the social market economy and for the ‘Chicago Boys’ ,whose emissary Jeffery Sachs, a radical monetarist called upon Russia to immediately join the World Market without any protection.” In the year 1992 the prices and the Ruble currency were liberalized. Instead of first testing out the popular recipes of the German Social Market economist Ludwig Erhard and create first a state under the rule of law; instead of preparing a transition period, of having agriculture flourish, consumerism was spread and as “Der Spiegel” wrote, a gigantic amount of capital flew out of Russia into foreign accounts in Switzerland, Cyprus, Bahamas – being unreachable for Russian tax investigators. ” Inflation was galloping and took all the savings away from the citizens. The next robbery was the privatization of business enterprises. The plan was to let all citizens participate on an equal basis in the economy by handing out so called “Vouchers”.

But given the huge inflation networks of traders managed to buy up those “vouchers”; directors of several firms received the vouchers from their employees and soon the national wealth concentrated in the hands of a few oligarchs.” (Chodorkowski, Potanin, Beresowski et al. E.H.)

According to de Faria there was “total chaos” under President Jelzin. The joint ventures legalizations were dominated by American consultancy firms like Goldman Sachs; in the economic policy Harvard economists had the say advocating a “shock privatization” which meant that the national economic wealth was to be distributed among the population. “This was the beginning of the oligarchs who at that time acquired shares from private citizens and bought up state owned business firms.” In discussions which de Faria had at that time with Russian citizens, they told him, that they wanted to be taken seriously, but the “West doesn’t take us seriously.” De Faria compared the situation during that period with the German Trust agency (Treuhand-Anstalt) which privatized East German enterprises after German reunification. Whereas under the German Trust agency only 12000 enterprises got privatized, “in Russia these were 100.000.

It was a totally chaotic period where Russian economists like Jegor Gaidar and Anatolij Tschubais introduced their radical cure.” That meant privatization without social obligation, the closing down of many productive industrial branches, shrinking industrial production and the collapse of agriculture. A dozen of billionaires – oligarchs – took over the control of industry, media and key power positions. An example for the absurd industrial policy was according to de Faria the case of the arms producing firm “Uralmash” with thousands of employees. From one day to the next the arms firm produced “spoons” instead of arms.

In the year 2000 Vladimir Putin came to power as Jelzins successor. What he did for the country in the following years, according to de Faria was “corresponding” to the expectations of the population; he brought an end to chaos, by introducing a “new order” and with the consent of the population he cared for the stability and security of the country. Up to this day there is an unbroken acceptance of this stability policy of Putin, according to de Faria.

In terms of foreign and security policy, de Faria accused the West that it didn’t understand Russia when it began to encircle Russia with NATO’s Eastern expansion. He made reference to a speech which was given by the former General Secretary of NATO Manfred Wörner on the 17th of May 1990. As de Faria emphasized, from Wörners point of view at that time and on the background of the “two plus four discussions” (the discussion between BRD, DDR and the four allies, which lead to the reunification treaty) Wörner tried to find a new modus vivendi for the Soviet Union that was dissolving, and he emphasized in his speech: “We have to find solutions that respect the legitimate security interest of all the participants – including the Soviet Union. I emphasize: all participants; in other words not only the Soviet Union.

That nation has a right to expect that German unification and Germany’s membership of the Atlantic Alliance will not prejudice its security.” He further emphasized that “Our strategy and our Alliance are exclusively defensive. They threaten no-one, neither today nor tomorrow (…) We are prepared for radical disarmament, right down to the minimum level that we must retain to guarantee our security.” And he continued underlining: “This will also be true of a united Germany in NATO. The very fact that we are ready not to deploy NATO troops beyond the territory of the Federal Republic gives the Soviet Union firm security guarantees.”