Home RED ZONE Why it is wrong to blame #immigrants 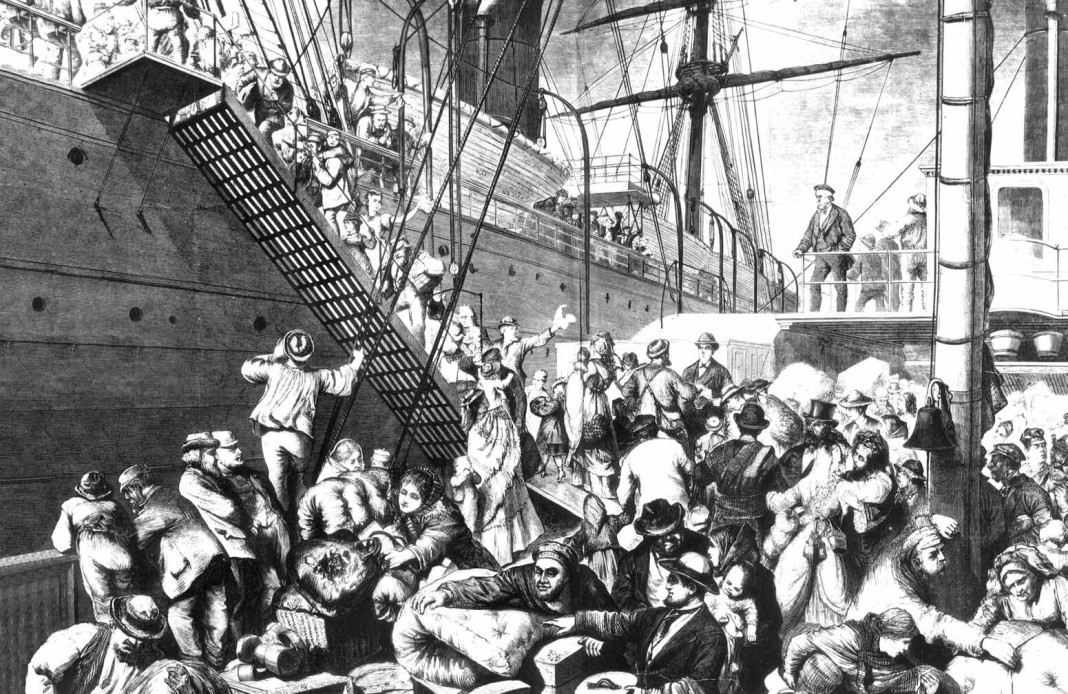 Immigrants have become a major scapegoat in recent years for sputtering Western economies: we reproduce here a paper published in the web magazine The Conversation, regarding the importance of immigration ofr the USA. The theme is of utmost importance today and it deserves a wider and deeper, and unprejudiced analysis.

From the U.K.’s jarring “Brexit” from the European Union to Donald Trump’s infamous wall and more recent proposal to apply “extreme vetting” to those wishing to enter the U.S., many politicians have found success by casting immigrants as a threat to the physical, social and economic welfare of natives.

In short, Americans (and our European brethren) are unhappy, and many are convinced immigration brings harm. A recent poll found that almost two-thirds of Americans think immigration, including the legal kind, “jeopardizes the United States.”

While it has become a popular notion in the West that immigrants jeopardize the job prospects of natives, over 30 years of economic research gives strong reason to believe otherwise.

And in fact, the opposite may be more likely: There’s evidence immigrants actually promote more economic
Why we blame immigrants for our troubles

Extensive reviews of research on the topic show that most studies of how immigration affects native wages and employment found very little effect.

Although economists have yet to arrive at a complete consensus, decades of studies generally do not support the notion that immigration harms the economy, market wages or native employment. So why do so many believe it when research suggests otherwise?

Recent media coverage can be partly to blame, for promoting more negative images of immigrants than positive ones. One example is how there’s been a lot of coverage of fraud in the H-1B visa program but relatively little of testimony by Bill Gates and others about its important benefits. And nationalistic politicians frequently drum up support by claiming immigrants are stealing our jobs.

A new migrant interested in the same job as you may diminish your odds a little, but a single immigrant with a good idea might end up creating hundreds or thousands of jobs that wouldn’t have existed had he or she not crossed an ocean or border (the impact of son.-of-a-migrant Steve jobs or South African tech enterpreneur Elon Musk comes to mind).

The labor market is dynamic, and both individual workers and employers constantly readjust to changing conditions. In fact, many economists have found evidence that natives quickly adjust to the labor market forces of immigration and in a way that often yields positive benefits.

Immigration flows into the U.S. do not affect all sectors equally. Immigrants are highly overrepresented in either very low-skilled manual and labor-intensive jobs or very high-skilled science and engineering occupations.

The types of immigrants who arrive and the areas in which they work are crucial for understanding the impact, and this concentration makes it possible to adjust to it.

In a 2010 study, Dartmouth economist Ethan Lewis found that companies in regions that saw inflows of less-skilled immigrants in recent decades adopted capital machinery at a lower rate.

In other words, because businesses substituted capital for less-skilled immigrant workers, they didn’t suffer harmful effects on productivity or value added per worker. This substitution lowers the pressure to reduce wages.

Economists Giovanni Peri and Chad Sparber found that inflows of immigrants – whether low- or high-skilled – induced native workers to shift to jobs that are more complementary in nature and where they have a comparative advantage. And that limited the impact on wages and employment.

For example, natives working in fields receiving large inflows of low-skilled immigrants – who had a comparative advantage in manual and physical labor – moved toward occupations requiring more communication-intensive tasks. They observed a similar phenomenon when high-skilled immigrants with comparative advantages in fields like science and mathematics enter the U.S. labor force. Rather than being laid off, native skilled workers moved to occupations that required more managerial and communication skills.

Just as natives move toward occupations in which they possess a comparative advantage relative to immigrants, they can also move across skill groups by acquiring education. Several economic papers, like ones by Jennifer Hunt and Will Olney and Dan Hickman, found that natives tend to acquire more education following the arrival of less-skilled immigrants. Increases in education benefit the long-term prospects of natives, and means they are no longer competing in the less-skilled labor market.

But beyond simply doing no or little harm to natives, there’s evidence immigrants actually benefit the overall economy – which helps everyone.

Recall that immigrants in the U.S. are highly represented in high-skill science and engineering occupations. Economists have long understood that economic growth is generated by innovation, which in turn comes from research and development. A study by Stanford economist Charles Jones found that nearly half of U.S. economic growth since the 1950s is attributable to the increase in the number of scientists and engineers engaged in research and development.

Combine this with the fact that about half of the growth in the number of scientists and engineers in the U.S. since the 1980s was due to immigrants and it is not difficult to understand the connection between skilled immigration and economic prosperity.

In a recent paper, coauthored with Giovanni Peri and Chad Sparber, I formally tested this idea. We examined whether increases in skilled foreign-born scientists and engineers in the U.S. from 1980 to 2010 improved productivity. We found modest gains in real wages for native skilled workers. And no negative impacts on native employment.

Complementing our finding is research by economists William Kerr and William Lincoln, who found that skilled immigrants increase innovation, thereby generating productivity gains for native workers most ready to take advantage of such technological advances.

As long as immigrants continue to innovate and invent, they can continue to boost economic growth.

Who is actually hurt by immigration

Research suggests natives’ productivity in certain occupations – ones that truly appear to be zero-sum – is also somewhat affected by immigration. For example, economists George Borjas and Kirk Doran found that the publishing rates of American math professors were negatively affected by inflows of Soviet mathematicians in the 1990s after the Soviet Union’s collapse. Since the amount of papers an academic journal can publish is fixed, more quality papers from immigrants will crowd out those written by natives.

Other studies that take a general focus on the labor market and find negative effects have been debated from time to time among academics, however, with little consensus.

A new opaper, however, calls into question many of these negative findings, showing researchers have been using measures of immigration that carry an inherent negative bias. Using correct measures eliminates the negative impact.

All in all, most of the research suggests that the fear that immigration will drastically harm native wages and job prospects is by and large unsubstantiated. In fact, much work has shown the labor market is dynamic, and that native workers and employers take measures to evade any competitive forces from immigration.

While some pundits and presidential candidates will likely continue to claim immigration is harming our economy, that won’t alter the evidence economists have uncovered in study after study. By the same token, claims that immigrants are flooding across our southern border (so we need a giant wall to keep them out) doesn’t change the fact that illegal immigration to the U.S. has actually been falling in the past nine years.

Though it is easy to believe that foreigners will overcrowd a frail, zero-sum labor market, decades of research has shown the only thing that sums to zero are the estimated effects of immigration.