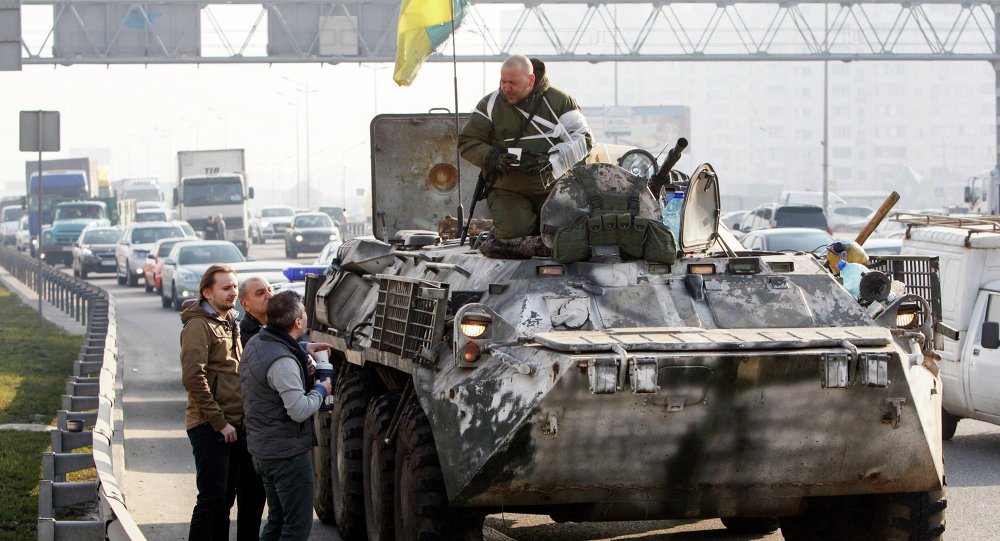 Over the last days a huge media hype has been spread all over the Western press which is centered on allegations by the US government, NATO officials as well as by Ukrainian military officials that a Russian convoy of 300 trucks, loaded with 2000 tons of goods could be used by Russia as a pretext for military intervention into Eastern Ukraine. This line is repeated despite the fact that Moscow itself has insisted on the need to cooperate with the Red Cross in order to get the desperately needed human aid to Eastern Ukraine. The media hype is so big, that it could lead indeed to a conflict between Russia and Ukraine which no serious minded in Europe has ever wanted.

What we are seeing in the Ukraine crisis is a “gigantic battle for facts” and whatis at stake essentially is the future European security policy and the role which Germany intends to play in the long run in respect to the Ukraine crisis. In a commentary which was written by the well- known British diplomat Alastair Crooke(former advisor on Middle East issues to EU foreign Policy chief Javier Solana and staff member of Senator George Mitchell’s Fact finding Committee that inquired the causes of Intifada) for the “Valdai Website” (30th July) an interesting analysis was presented about the Ukraine crisis and the implications this may have for Germany‘s role in Europe and and the European Security policy in general. Crooke makes reference to an article which was written by the well – known US Social Scientist Immanuel Wallerstein for the Los Angeles Times, in which Wallersteinpresents the thesis that one of the targets in the Ukraine crisis is Germany and the question whether Germany is able to get rid of its dependence on America.

On the background of the present “breach” in German-American relations, Crooke qualifies the recent spying affair in Germany as “the tip of a much bigger iceberg which itself is that the post- war dispensation of America’s insertion into Europe via NATO – effectively took and still takes –security issues off the table for the European Union. EU security policy, in effect is NATO policy; which is to say US policy.”

In his Oped in the LA TimesWallersteinmade a direct connection between the geopolitical decline of the US and the attempt by the US government to use the Ukraine crisis and the MH17 tragedy so as to box in the Europeans, in particular the Germans. In order to substantiate his thesis he wrote: “The basic problem is that the United States is, and has been for some time, in geopolitical decline. It doesn’t like this. It doesn’t really accept this. It surely doesn’t know how to handle it, that is minimize the losses of the United States. So it keeps trying to restore what is unrestorable – U.S. ‘leadership’ (read hegemony) in the world system. This makes the United Sates a very dangerous actor. No small number of political agents in the United States is calling for some sort of ‘decisive’ action – whatever that could possibly mean. And U.S. elections may depend in large part on how U.S. political actors play this game. …. That is what Europeans in general and now Chancellor Angela Merkel of Germany in particular, are realizing. The United States has become a very unreliable ‘partner’. So even those in Germany and elsewhere in Europe who are nostalgic for the warm embrace of the ‘free world’ are reluctantly joining the less nostalgic others in deciding how they can survive geopolitically without the United States. And this is pushing them into the logical alternative, a European tent that includes Russia. …. As the Germans and the Europeans in general, move inexorably in this direction, they have their hesitations. If they can no longer trust the United States, could they really trust Russia? And, more importantly, could they make a deal with the Russians that the Russians would find it worthwhile and necessary to observe? You can bet that this is what is being discussed in the inner circle of the German government today, and not how to repair the irreparable breach of trust with the United States.”

The scenario described by Wallerstein, Crooke notes , is deeply feared by influential figures in the US and he argues that the MH 17 and the Ukraine crisis may have been used as an opportunity, to “demonize” the militias in Eastern Ukraine and President Putin and use the loss of the airliner and civilian life – as a pretext to “close off German options and to leave Merkel with no options but to support level 3 sanctions on Russia.”

According to Crooke Moscow and the US have a totally different narrative concerning the MH 17 incident. Contrary to the U.S. the Russians not only produced satellite images and showed records taken off from ATC radar screens; the Russian defense minister also posed ten questions to find out about the circumstance of the airliners disappearance. The conclusion which Crooke draws is that we witness a gigantic battle for facts. It is “the struggle for the confidence of the German leadership (as well as some other European, including France, Italy and Austria). Russia has conveyed privately all of its evidence to Europe. Will Kerry’s ploy succeed in eviscerating all German options- other than that of having to follow America’s lead? …But if it transpires that the US is perceived as having stove piped Europe into level-3 sanctions and to the brink of conflict with Russia on flimsy circumstantial evidence, this will weigh heavily with a German leadership that – as Wallerstein already noted – sees the U.S now as dangerously unguided and incoherent in its foreign policy.”

In another critical and to some extent quite provocative website commentary (http://www.unz.com/article/the-ukraine-corrupted-journalism-and-the-atlanticist-faith/), which was published August 14th by the senior Dutch journalist Karel van Wolferen (a retired professor of Amsterdam University who since 1969 has published for many newspapers such as the Washington Post, New York Times and Le Monde and who has received the Dutch award for journalism) more light is shed on the “corrupted journalism” manifested at present by the majority of Western media.

Analyzing the causes for the present corruptionin the European media,
vanWolferen notes that the “lack of objective classical journalism with regard to Ukraine” is based on the fact that the European media have copied the “approach of Anglo- American mainstream media andhave presented ‘news’in which insinuation and vilification have become substitute for proper reporting.The key reference he uses in order to illustrate his thesis is the recent downing of the MH17 airliner- a tragedy which as Van Wolferen underlines, was used by the Dutch media for a hasty finger pointing to Moscow. YouTube and other internet sources were portraying the inhabitants at the crash site as “uncooperative criminals”, Wolferen notes, which for many viewers amounted to a “confirmation of their guilt”. He points out that there was not one single commentary in the press which “I have seen, that even intimated that the Ukraine crisis- which led to a coup and civil war- was created by neoconservatives and a few R2P (Responsibility to Protect) fanatics in the White House, apparently given a free hand by President Obama.”

Instead of serious investigative journalism, van Wolferenobserves an “editorial indifference to potential clues that would undermine or destroy the official story line.”As an example he lists various hypothesis that from his point of view could serve to find the truth behind the downing of the Malaysian airliner.“The presence of two Ukrainian fighter planes near the Malaysian airliner on Russian radarwould be a potential clue I would be very interested in, if I were investigating as journalist… This appeared to becorroborated by a BBC report with eyewitness accounts from the ground by villagers who clearly saw another plane, a fighter close to the airliner near the time of its crash and heard explosions from the sky.” Van Wolferenadditionally makes reference to one of the leading OSCE inspectors Michael Bociurkiw who “has described in CBC World News two or three ‘really pock marked’ pieces of fuselage’ and who said that ‘it almost looked like machine gun fire; very, verystrong machine gun fire that has left these unique marks that we haven’t seen anywhere else.’”

Lastly he refers to the “allegedly confiscated radar and voice record of the Kiev Air control Tower” that could clarify why the “Malaysian pilot veered off course and rapidly descended shortly before his plane crashed” and find out whether it is true that “Kiev air controller were sent packing immediately after the plane crash.”American authorities with access to Satellite images should be urged “to show the evidence they claim to have of BUK missile batteries in rebel hands as well as of Russian involvements and ask them why they have not done so already.”

None of those facts have been presented by the mainstream European press. Van Wolferencalls ita “slavish European media loyalty to Washington”which has its roots in the tradition of “Atlanticism.” Van Wolferen calls it “a terrible affliction for Europe whichfosters historical amnesia, willful blindness and dangerously misconceived political anger.” He goes even further in stating that “NATO has … been a liability for the European Union as it prevents development of concerted European foreign and defense policies and has forced the member states to become instruments serving American militarism.”

It was U.S. President Bill Clinton who as van Wolferen notes, for purely electoral reasons after the end of Cold War boasted “about an enlargement of NATO” that led to a situation where NATO extended to double the number it had during the Cold War. A move which as van Wolferen points out, was called by the “famous American specialist on Russia, Ambassador George Kennan, originator of Cold War containment policy, ‘the most fateful error of American policy in the entire post –cold –war era.’”