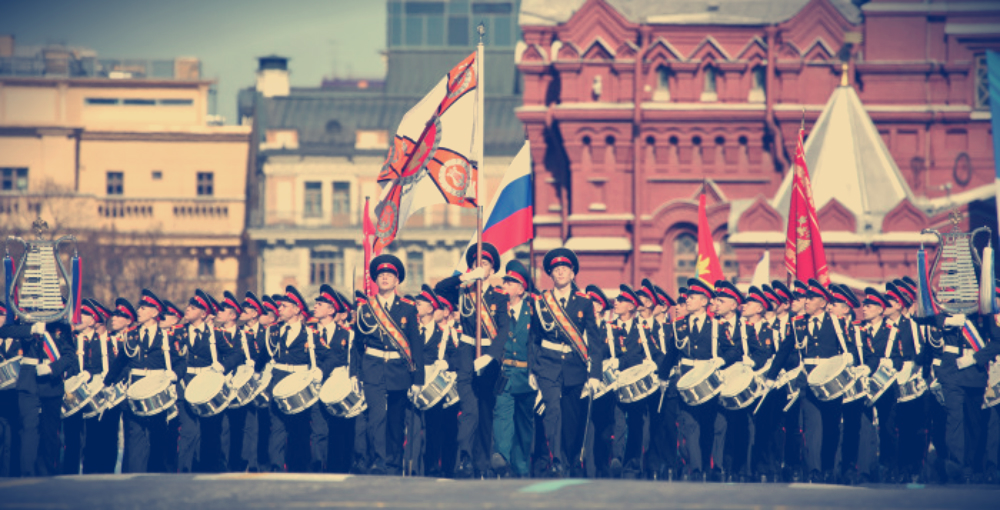 One year and a half after the break out of the Russia /Ukraine crisis which provoked a deep split between Europe and Russia and led to a major deterioration in German -Russian relations, leading German politicians took the occasion to commemorate together with their Russian colleagues the millions of victims which the horrendous world war II left behind in Russiaand Europe. The main idea expressed in a that was speech given by German Foreign Minister F.W.Steinmeier, was that places like Volgograd (Stalingrad) which wasonce a place of devastating war has today becomea placeof reconciliation and that both Russians and Germans are united in their determination “Never Again” and that both nations work for a new spirit of cooperation.

Noteworthy was a speech which was given by German President Joachim Gauck on the 6th of May in SchloßHolte-Stukenbrock– a place in the Northeast of the federal state of North Rhine-Westphalia. Gauck spoke about the “murderous horror” unleashed by Germany whichdevastated our continent; a war inwhich millions of Jews were murdered,in which millions of soldiers and civilians died, while millions of people in many countries were driven from their home. “We have gathered here today in SchloßHolte-Stukenbrock”,Gauck emphasized in his speech, “to recall one of the worst crimes of the war- the deaths of millions of Red Army soldiers in German prisoner – of – war camps.They died in agony without medical care, starved to death or were murdered. Millions of prisoners of war for whose care the German Wehrmacht was responsible under the law of war and international agreements.” Gauck described the horrendous prison conditions, underlining that “these prisoners were forced on long marches, transported in open goods wagons and sent to so –called reception or assembly camps that provided almost nothing at the start – no shelter, not enough food, no sanitary facilities, no medical care.Nothing.They had to dig holes in the ground and build makeshift huts for shelter- they tried desperately to survive somehow.Huge numbers of these prisoners were then forced to do hard labourwhich, in their weakened and starving condition, they often did manage to not survive.”

Gauck referred to the infamous prisoner of war camp “Stalag 326 Senne”, which was once located a few hundred meters from SchloßHolte-Stukebrock, in which“310.000 prisoners of war” had been imprisoned. “A great many of them died, and tens of thousands were buried here. (…) What do numbers say? Not much- and yet they provide information.They give us at least an idea of the horror and merciless treatment suffered by Soviet soldiers in German prisoner of war camps.We must assume that far more than half of the total number of over 5,3million(!)Soviet prisoners of war did not survive.Millions of fates, millions of names, millions ofbiographies. Russians,Ukrainians,Belarussians,Kyrgyz,Georgians,Uzbeks,Kazakhs,Turkmens- soldiers from all the ethnic groups that were part of the Soviet Union at the time.”

An equally important speech was given by German Foreign Minister Walter Steinmeierduring a commemorative event in Volgograd(formerly known as Stalingrad) on May 7th, where he together with Russian Foreign Minister Lavrov visited the war graves –cemeteries of Russian and German Soldiers, who died in Stalingrad during world war II. In his speech Steinmeier reminded that Volgogradonce being a place of war, “today is a place of reconciliationwhere Germany and Russians meet to make music German and Russian music”,Steinmeier called Volgograd “a city of heroes” -human beings who suffered immensely fathers, mothers,daughters, civilians and soldiers.“These people achieved inStalingrad the first turn during World War II. Theystarted here the liberationof Europe from the Naziyoke making immense sacrifices. I bow infront of those victims as a German in deep grief and ask for forgiveness in light of the immense suffering which Germans in the name of Germany inflicted upon the others”. According to SteinmeierVolgograd is the right place to have Germany and Russia commemorate together the victims of World War II.“70 years after the immense suffering which Germans inflicted upon this city, we are no more alone in the commemoration.Russian, Germans and all peoples of Europe are bound together by a common‘Never again’ and a common responsibility for peace in Europe”, Steinmeier said.

While German Chancellor Merkel did not participate officially at the 9th of May parade (it was boycotted by the US and most of the state leaders from Europe) which was celebrated in different ways in hundreds of Russian cities, she nonetheless paid tribute to the commemoration events by visiting Moscow on May 10th, in order to lay down a wreath at the tomb of the Unknown Soldier together with President Putin and commemorate the millions of soviet people who had been killed during WWII. While the Chancellor showed respect to the Millions of Russian victims which the horrendous Nazi war had left behind, she at one point during the press conference showeda remarkable “lack of sensibility” when she spoke about Russia’s “criminal annexation” (for the first time she used this characterization) “and contrary to international law”of the Crimean Peninsula.

The reception given to the German Chancellor by President Putin was made in an attempt to be cordial and the meeting between the two statesmen was characterized by a “common” effort to solve the Ukraine as well as other burning global conflicts in a new spirit of cooperation.As Merkel underlined at her arrival in Moscow,Germany is working “with” Russia,“not against” the country. At the joint press conference President Putin said that while Russia and Germany differ greatly in assessing the coup in Ukraine, they do have a similar stance on resolving the country’s crisis through diplomatic means. “While discussing the international agenda, naturally the situation in Ukraine was the center of attention”,Putin said.“Chancellor Angela Merkel and I discuss (this issue) on a regular basis, as well as with the President of France and the President of Ukraine in the so-called Normandy format, which has proven itself quite an effectivemechanism of international contribution to the peaceful settlement of the conflict. Yes, we differ greatly in the assessments of the events that led to an anti- constitutional coup in the Ukraine capital in February 2014”, Putin said. He gave a lot of attention to the economic bilateral ties, pointing out that the goods turnover between the two countries dropped by 6,5% last year for the first time in five years and nosedived by 35% in the first two months of 2015. He urged that the economic blockade of eastern Ukraine must be lifted; while the issue must only be resolved through dialogue between Kiev and the self- proclaimed Republics of Donetsk and Lugansk.”

He further said: “I’m convinced that in order to provide reliable and long-term settlement only setting up direct dialogue between Kiev,Donetsk and Lugansk is possible. I believe that this is one of the key conditions for the settlement as a whole.”“We believe that it’s necessary to lift the economic blockade, renew financial and bank ties, as well as to hold a constitutional reform with the participation of the country’s southeast.”

.
Chancellor Merkel underlined that she had not come to Moscow in an easy phase of German Russian relations. “It is however important for me to commemorate together with Putin those who died during world war II. In front of the Russian people I bow in front of themillions of victims which this war that was unleashed by Nazi Germany left behind. “We willalways be conscious that it were the peoples of the Soviet Union and the soldiers of the Red Army which at that time had to deplore the highest amounts of victims”. She reminded the audience that the war was conducted as a brutal race and extermination war, which inflicted unbelievablesuffering uponmillions of people. I commemorate the citizens of the besieged Leningrad which died of hunger and misery; the millions of abused and murdered civilians, concentration camp prisoners and prisoners of war.” She spoke about the war as a war of scorched earth inwhichnumerous villages and cities were literally eradicated by the Wehrmacht and SS. I remind the crimes of holocaust which will remain in the memory of us Germans as a constant warning. I remind that Russian,Ukrainian, white Russian and other soldiers of the Red Army liberated Germany together with the western allies from its Nazi Regime.”

Inlight of this horrendous history she underlined that she is grateful that reconciliation between the two countries was made possible and that both countries can work for a better future. At one point however she said: “Given the criminal annexation of the Crimean Peninsula whichconstituted a violation of international law and the military fight in Eastern Ukraine, this cooperation suffered a big blow since the Europeanpeace order got violated.”
At the same time she underlined the need to learn the lessons from history and hence do everything – as difficult as it may seem -to solve the conflicts peacefully and in dialogue, i.e.diplomatically.” She mentioned the Normandy format for dialogue and thanked the efforts of the OSCE. Merkel put the effort concerning a peaceful settlement of the Ukraine conflict in line with the hope to settle the Iran nuclear issue as well as Syria peacefully. “We want to do this together ‘with’ Russia and not ‘against’ Russia”.
Former Chancellor Gerhard Schröder: Security only exists with Russia

“Peace and stability for Europe can only be achieved in security partnership with Russia. NATO, the EU and Russia must see each other as partner not as enemies”,Schröder said duringa conference speech given at the Protestant Academy Bad Boll(Göppingen). He warned of a newescalation of Ukraine conflict, demanding from the West to contain this danger, by stopping military shooting as well as by “verbal disarmament”. He stated that even if people may regret it, the “Crimea will remain part of Russia in future.” Healso strongly blamed the US for pushing a wrong and dangerous policy vis- a-vis Russia, especially since the 1990ies.While the US looks at Russia as “geopolitical problem”,the Europeans see the country as a neighbor with whomthey want to live inpeace.