His images depict an intricate landscape shaped by factories and railroads, and by the collision of traditional European forms with the novelty of American, electric-lit night. His human subjects manifest a pervasive sense of alienation among individuals of a unique time and place. And for these reasons, the haunting nature of much of his urban imagery has led some to interpret Hopper’s work as being biased against cities, themselves. But this is not quite right.

In a 2002 article, “Fear of the City: 1882-1967: Edward Hopper and the Discourse of Anti-Urbanism,” Tom Slater, now a scholar at the University of Edinburgh, made the case. He argued that much of Hopper’s imagery carries forward a deep American tradition of anti-urban sentiment, which “began with the pastoral musings of Thomas Jefferson and was furthered significantly by the transcendental contemplations of Ralph Waldo Emerson. [It] grew stronger and became embedded in social life through powerful representations of urban malaise in late nineteenth- and early twentieth-century American literature, art, and social theory.”

Such a strain certainly exists in American thought. Well before Hopper’s time, the prevailing transatlantic Romanticism of the mid-19th century converged with reactions to the excess of industry and the uniquely American frontier ethos. Together, these threads helped forge a lasting American identity that saw salvation as always being over the next horizon. In this optimistic view, cities (especially large, eastern industrial ones) were places to be escaped. Rather than representing the boundless promise of America, the old coastal cities represented a kind of domestic version of the very European confines many Americans had meant to leave behind: crowding, competition, class, tribalism, and other factors that circumscribed individual lives. As recently at the late 20th century, back-to-the-land movements of both the left and right represented the continuing life of this idea.

Yet while Hopper was himself a small-town native (hailing from the boat-building village of Nyack, in New York State’s then-rural Hudson Valley), and was also the product of a traditional religious upbringing, he would find success and choose to live out his life in New York City—the most antithetical of American places. Like most settlements along the eastern seaboard, New York City was built out from the urban forms of European colonial ports, giving its region a typical eastern bias toward settlement values—as opposed to frontier ones—in the late 19th century. But unlike the other great East Coast metropolises, New York City also teemed with an endless stream of immigrants from the Old World whose lives layered the customs of contemporary Europe into a density that exceeded even the greatest cities of the continent. Thus, Hopper’s adopted home represented a striking counterpoint to the vast frontier that animated the American imagination. Quite unlike the Lake Poets, or even the painters of the Hudson River School (who had adopted Hopper’s native region a generation earlier), Hopper’s life also contrasted with the ideals of transatlantic Romanticism. An urban artist who focused on the richness and intricacies of human settlement, his subject matter was notably different from that of the traditional Romantic who saw nature as a source of spiritual renewal; a counterpoint to a corrupting and inherently political human world. But this is not to say that Hopper was unmoved by the negative qualities of industrial life — only that it did not, precisely, turn him against cities.

[He] lived through a time of continuous changes to the cityscape, and changes in the neighbourhood where he lived, Greenwich Village, were as profound as in any area of the city. Hopper was dismayed by the ‘crushing of Washington Square’ by the erection of tall buildings around the park which he saw as ‘huge coarse and swollen mounds—blunt, clumsy and bleaching the sunlight with their dismal pale-yellow sides’ (citation omitted). Such signs of unruliness and dislocation were serious violations of all that he had been brought up to believe, that humans should be in harmony with nature and situated away from anything which would disrupt this most Victorian, even puritan, way of existence.

If Slater is right, then it seems notable that by the late Victorian period, when Hopper was growing up, some of the once-countercultural touchstones of early 19th-century Romanticism—especially, the idea “that humans should be in harmony with nature” —had calcified into a set of bourgeois notions of propriety, in somewhat the same way the countercultural values of the 1960s have today been repackaged into the predictable platitudes of Whole Foods advertising. Yet these notions, while perhaps still viable in certain agrarian settings, had been pushed to the margins of the industrial world in which more and more of Hopper’s American contemporaries made their lives. Indeed, the Victorian landscape architect Frederick Law Olmsted made a career of providing America’s city-dwellers with beautiful substitutes for the Romanticist’s connection to nature.

Hopper’s urban landscapes depict the unique product of a 19th-century collision between the traditional building-block forms of European urbanism and the gargantuan upscaling that was forced upon Western cities by the explosion of heavy industry —especially railroads —and the long mass migrations that took place from the country to cities (including, in America, migrations from the Old World to the New). Shaped in the period before modern zoning, the Victorian cities that lasted into Hopper’s era were dense and harsh, with a cacophony of activities and lifestyles layered atop one another. Yet, even in their chaos and discordance, these cities, in their late Victorian heyday, expressed the iconic forms of a world still infused with the cultural symbols and classical proportions of Europe’s pre-industrial past.

So, while some see Hopper’s haunting imagery of dark, foreboding, and lonely urban scenes as part of a long (and presumably unwarranted) tradition of city-hatred in American thought, there are reasons one might hesitate to assign Hopper’s work to that thread. Most significantly, his city scenes are empathetic. Though sometimes dark and anomic, his richly layered settings are also mysterious, enchanting, and beautiful. His New York is essentially a neon-lit update to what remained an essentially Victorian city. The extant landscape is a form to be reckoned with, not invented. And while his inhabitants frequently seem conflicted, or unfulfilled, or stoic – they are not necessarily miserable. These internal contradictions remain true of large cities and their inhabitants today. To acknowledge them, and their poignance, is not to malign the city. It is simply to be an honest reporter.

Edward Hopper’s New York, a 2005 curation by Avis Berman, collects the disproportionate number of the artist’s images that are set in the city. In doing so, Berman’s text focuses on the personality of Hopper’s adopted city, and its role as the setting of so many of his works. And we see that Hopper had unique criticisms of New York City, in contrast to cities writ large. Discussing the content of some of Hopper’s letters from his early career, Berman writes:

Hopper harps on [the insight] that in New York and its environs, the grim business of living, particularly the grinding impact of commercialism, blinkers people and encases them within themselves…. His understanding that New York was essentially a commercial city in which everyone was bent on business, confirmed by his unhappy [early] years as an illustrator, makes itself felt in his art via the state of relations he portrays among men and women. Materialistic pressures harden people, and they become estranged or indifferent to survive them. Hopper probed this Darwinian theme at its most literal in Office at Night (1940; citation omitted) and Conference at Night (1949; citation omitted), which show white-collar workers in impersonal, drably furnished offices. (Berman, 37)

It is hard not to concede the reasonableness of Hopper’s moral and spiritual skepticism—if that’s what it is—about many of the circumstances he observed and depicted in New York City. More than most urban settings, this city embodied in Hopper’s time an unusual combination of the failings of both industrial cities and raw capitalism. The early urban planning movement was made up of people whose biases were quite the opposite of anti-urban, and who were nevertheless driven by precisely the same visceral and moral reactions that Hopper seems to have experienced, in New York and other centers of industry and trade.

The heyday of industrial urbanism produced a society whose excesses are not tempered by humane concerns. This is a point that radical, reformist, and conservative thinkers alike observed in the 19th century in response to the so-called march of progress. Though often dismissed in its time as mere sentimentality or temperamental conservatism, skepticism of rapid change has proven to be an abiding theme of the modern world.  To acknowledge the paradox of industrial modernity—its riches and conveniences, but also its expedience and nihilism—is hardly the hallmark of an anti-urban mind. Examined in all its context, the object of Hopper’s disapprobation is not urbanism, per se, but the heavy industry and constant disruption by economic forces that pervaded even the oldest and most settled of American cities during his lifetime. These conditions persisted well into the 20th century and were the driving impulse behind both the advent of zoning laws and post-World War II middle-class flight to suburbia.

The rapid change that waves of industry and their attendant migrations imposed on those in their path had a particularly devastating impact on those individuals and traditions that required – and had come to expect, from the patterns of preindustrial life— a high degree of stability and patience to thrive. Neighborhoods shaped by generations of careful refinement, such as those described by Camillo Sitte in The Art of Building Cities, were one of the phenomena that suffered most immediately from the speed and scale of industrial change. Perhaps this is the real tragedy of the industrial age—not the disruption that one could readily see, but the haunting sense of lives and traditions that could have been lived more fulfillingly, and more sincerely, in another setting; plans that were cut short by the stupid, unchallengeable power of sudden disruption. Though not mentioned in Slater’s piece, or included in Berman’s collection, House by the Railroad is one of the most haunting and tragic of all Hopper’s works. Without words, Hopper gives voice to this reason for pause. Notably, though it contains many of the sad themes that have been associated with Hopper’s city images, it is set not in a large city, at all, but in the small Hudson Valley town of Haverstraw. The dark force in Hopper’s imagery is not urbanism. It is the disruptive march of industry.

Theo Mackey Pollack practices law in New Jersey, and is a consultant on urban-planning projects, including Hurricane Sandy recovery. He blogs at legaltowns.com. 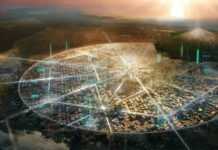 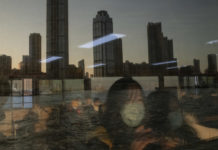