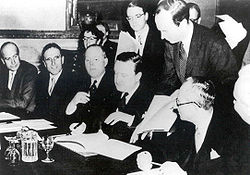 On 31rst of March a one page Advertisement was published by the German Daily Frankfurter Allgemeine Zeitung (FAZ).  It was an open letter addressed to the “Dear German Friends” and signed by prominent Italian politicians, including Giovanno Toti (President from Liguria), Stefano Bonaccini (President from Emilia Romagna), the mayors from Venice, Bologna, Genoa, Milano, Brescia, Padua, Bergamo, Ancona and Syracuse, as well as Carlo Calenda, European Parliament deputy. The letter is a dramatic appeal which underlines that the challenges which the EU is facing makes it necessary to find a “common answer” to the Corona pandemics crisis, involving a plan for the economic, industrial and social recovery of Europe. “This is why nine (!) European states (including Italy, France, Spain and Belgium) have proposed the common issuance of Eurobonds. We don’t demand  a ‘communitization’ of public old debt, but think that enough means should be provided for a huge safety plan for the economic, health and social sector, which should be administered by the European Institutions.“

The authors correctly point out that the attitude of Netherlands “is exemplary for the lack of ethics and solidarity; a solidarity, which after the Second World War was also shown by many European countries towards Germany until reunification.” The authors refer in particular to the famous 1953 London Debt Conference (at that time the former Deutsche Bank chairman Hermann Josef Abs was a key negotiator between Germany and 21 countries- including  France, Belgium , Italy and Spain). The London debt conference decided that the 29,7billion DM of German debts which Germany would never have been able to pay back, were to be reduced by half and declared a debt moratorium, as the authors recall in the letter. This way, they state, “Germany was able to avoid a state bankruptcy…Italy up to this day is convinced that this decision was a correct one.” They repeat that the issuance of “Corona bonds” today means that “old debts will be neither annihilated nor distributed” and warn that “small minded national egoism is not the right path to take but “we all can prove that Europe is stronger than those who want to weaken Europe.”

The “open letter” was published at a moment when the EU finance ministers in these days are involved in a major debate concerning the question which EU measures should be taken to find a way out of the Corona emergency crisis that has paralyzed the entire EU economy. The fight within the EU is centered on the question whether or not the EU could agree to the issuance of “Corona Bonds.” So far the EU ministers have lamentably not been able to find an agreement, given the strong opposition which is coming from Germany, Netherlands, Austria and Finland against what is called “Corona Bonds.”

The German position, which has been taken by German Chancellor Angela Merkel, German Finance Minister Scholz as well as by the Chancellery Minister Helge Braun and generally by some of the von Hayek oriented German economic dailies, argue half- heartedly, that the EU has enough  existing instruments to financially help. This would involve the European Investment Bank (EIB), the European Stability Mechanism (ESM) and a revised European Union Budget (free from Maastricht criteria etc.). They hence argue that the issuance of “Euro bonds” as a new financing instrument for a limited period of time is not an option. In reality this means that the EU is unwilling to “shoulder in the spirit of solidarity” and help alleviate the economic damage which has been perpetrated to some European countries as result of the Corona pandemic. While the Netherlands is exhibiting a very “stingy” liberal attitude, the German elite is hiding behind “formalistic arguments” and “old prejudices”; it looks for purely “regulatory” answers and  keeps referring  to “principles” that must be “obeyed”, rather than  thinking in an “innovative” way in midst of an extraordinary crisis. This stubbornness and possibly repeated “historic mistake” risks to tear apart the entire EU.

Fortunately there have been in the last days some more reasonable reactions coming from German political representatives.  This includes the chairman of the “Adenauer Foundation” and former President of the German Federal Parliament, Norbert Lammert, who in an Interview with the Süddeutsche Zeitung (SDZ) criticized Merkel’s resistance against “Corona Bonds”.  Looking at such an extreme and extraordinary situation and the growing despair in important partner countries, the impression of a “limited solidarity” is very difficult to bear, Lammert stated.  “Illuminated and determined European personalities like former Chancellor Helmut Kohl in an obvious emergency situation like the present one, would probably decide in favor of a short term financing mechanism”, that responds to the political and economic expectations. Lammert warned that the fight about Corona bonds threatens to become a “war of belief” between those who are for and those who argue against it and that in the long run it would weaken the EU, precisely at a moment where common action is more than needed.

From the side of the German economy, Professor Michael Hüther (Chairman of the “Institut der deutschen Wirtschaft”, IW, Cologne) in a clear and sober way argued in favor of  Corona Bonds in an interview with a ZDF TV special edition (7.04.20). He characterized the “Corona Bonds” as “short term emergency measures” that are needed now and emphasized that the reference to the ESM umbrella misses the point and the purpose, given that the ESM structure had been created only to deal with State debts.

“No country should be left alone” – demanded by 2 EU Commissioners

In an common statement in the FAZ economic section (April 6th) entitled “We need a fourth European pillar”, the two EU Commissioners Thierry Breton (France) and Paolo Gentiloni (Italy) outlined in detail  which measures should be reasonably taken to get the EU economy restarted as a whole.  Starting from the fact that by now almost 4 billion inhabitants of this planet live in confinement and that major cash flows are being injected by ECB (750bn) and by the respective national governments of the EU into the respective economies of the EU, including the lifting of the “Maastricht criteria” (limiting national budgets and expenditures to be more than 3% of the GDP) for the EU budget, as the President of the European Commission von der Leyen had announced, both Commissioners emphasized that “we need to go ahead one more step in order to stop the crisis, i.e. protect business, employees and get the industry restarted in each country as well as in the  European domestic market.” They outlined 3 principles of action that need to be respected:

The need for the financing of the 27 states must be in appropriate relation to their contributions to the EU budget, they stated. They referred to the ECB plan (750 billion Euros) for financial assistance, stating that there must be “equal and fair access for the financing of plans.” Additional support could be given by the European Stability Mechanism (ESM), but in an “innovative” way which implies working over its conditionality criteria, which must be loosened and redirected to function as an answer to the crisis, they wrote. They also mentioned the European Investment Bank (EIB) which could “enlarge its intervention capacity” responding to the “urgency” of the situation and the short term necessity. And they mentioned the 100 billion Euro plan by the EU commission to help employees to secure their incomes.

The authors however also stressed that “a fourth pillar” of European means is needed: while the ECB is acting in term of the currency and finance sector, the EU member states should demonstrate “common decision and innovation capacity,” for example in the form of “possible Euro Bonds, whose function will permit the long term issuance of bonds for common investments.”

The EU Economic Commissioner Paolo Gentiloni in a separate interview with “Die Welt” (4.04. 20) warned that “if we don’t find a common answer, anti- European forces will exploit the crisis for their own purposes.” Rather than demonstrating strength, he bemoaned, that there is fear of a “new debt crisis in the Euro Zone.” He emphasized that this crisis cannot be compared to the one 10 years ago (Greece debt crisis). This crisis, he stated, has hit all countries simultaneously and hence the demand for common “Corona Bonds”.  Gentiloni stated that “we need a combination of instruments which also involves credits from the EIB as well as credits from the ESM as well as proposals for European short time money issuance from the EU budget; he underlined that the “economic standstill” which we face is hitting all and that the crisis is not comparable with the one 10 years ago.

In terms of “Corona Bonds’ he specified: “We need a European economic ‘stimulus package’ which could be financed by the issuance of ‘bonds’ which are issued by institutions which we already have EIB, ESM, the EU Commission and also the EU countries.” His message to Germany was clear: the issuance of bonds should be linked to a purpose and should be a “unique measure” adopted under “extraordinary conditions.”  He used the term “Recovery Bonds”, underlining that the issue is not debts from the last 30 years, but “common debts in order to fight the Corona virus and its consequences.” He spoke about the need for a “European Recovery and a Marshall Plan (…) When we start reconstruction we must learn the lessons from this crisis. Our health system should be strengthened and the social systems upgraded. At the same time we should make the European Economy more sustainable and push ahead digitalization,” Gentiloni stated. “The state after the crisis will play a more important role in the Economy.”