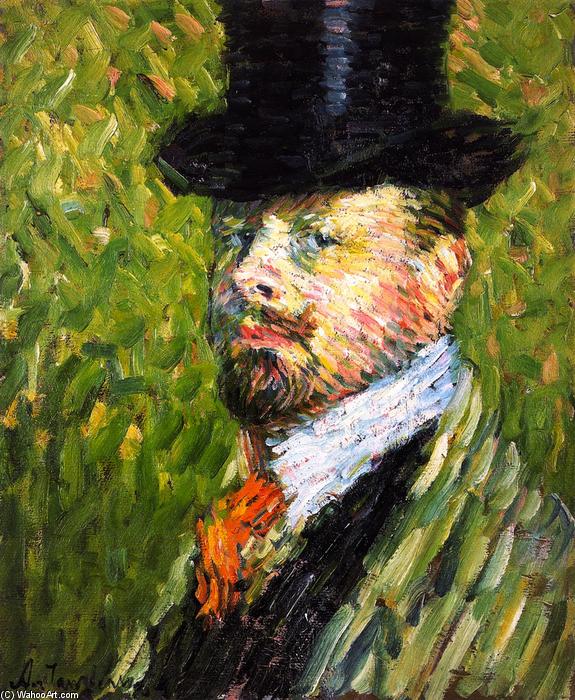 At the occasion of the 150th birthday of the Russian painter Alexejvon Jawlensky (1864-1941) a special anniversary exhibition was opened in the Wiesbaden museum under the title “Horizon Jawlensky 1900 -1914”.The anniversary exhibition reflects the early work of the painter in the mirror of his early artistic encounters. Under the patronage of the President of the German Federal Republic Joachim Gauck it was promoted by the former Mayor of Wiesbaden Dr. Müller and the actual municipal cultural representative of the city of Wiesbaden, Dr. Lore- Rose Scholz as well as by other cultural foundations. A total of 180 exhibits are shown including 100 works by the painter Jawlensky and 80 works from various pioneers in the art of painting who shaped the oeuvre of the painter.

An important highlight in the commemoration of Jawlenskys 150th anniversary was a birthday Gala which was organized end of March by the Wiesbaden based Russian- German Cultural association HERUS (Hessen- Russia intercultural association) in the hall of the Museum of Wiesbaden. The importance of the event, to which representatives of the Russian- German cultural scene, the German –Pushkin Society and the Consul General of the Russian Consulate in Frankfurt RuslanKarasanov were invited, must be seen on the background of the actual events in Ukraine and the beginning alienation in the German –Russian relations. This gap can only be overcome by an intensified cultural dialogue. From this perspective the exhibition gains some extra weight.The Curator of the exhibition, Dr.Roman Zieglgänsberger and his scientific assistant Vera Klewitz succeeded in giving an impressive guide, which introduced the guests into the thinking and oeuvre of the painter.

Portrait of the painter Alexej von Jawlensky
Among the most important stages in the development of Jawlenskyare his education and training in Tsarist Russia in St. Petersburg, where he after an early military training visited the art school of the famous Russian painter IlyaRepin (1844-1930).Here he got his first artistic training and became familiar with the different Russian traditions, followed by a stay in Munich 1896 – 1902,several visits to the Berlin “Secession”, a stay in Murnau(near Munich) 1908-1910, and several trips to France, including Paris and the province.In Munich Jawlensky was living from 1896 together with his partner Marianne of Werefkin (1860-1935).Their apartment was like a spiritual center for many artist personalities. The beginning of World War I (1914-1918) forced the painter to emigrate to Switzerland. After the war he settled in 1921 with his wife Helene Nesnakomoff (1881-1965) in Wiesbaden, where he died in 1941.
Among the most important pioneers in the art of painting of Jawlensky were aside the Munich artists including Wilhelm Leibl and his circle Franz von Lenbach,Leo Putzet al. ,in particular the Dutch painter Vincent van Gogh, whose works had a liberating effect on Jawlensky and brought the painter to a new inwardness and spirituality. Characteristic of his art were also the works of the French painters Paul Cézanne, Paul Gauguin and Henri Matisse.
The cover picture of the excellent catalog “Self-portrait with Top Hat” shows how much Jawlensky was inspired by Van Gogh’s “Self Portrait” (1888). The Curator Dr.Zieglgänsberger in his catalog commentary refers to an extract from the “Memoires” of Jawlensky :“In the spring of 1905 (in reality it was 1906 R.Z.) we all went to the sea side in Brittany, to Caranteque. Here I worked a lot and I understood according to my ardent soul to translate nature into colors. I painted many landscapes from the window- bushes and Bretonheads. These pictures were glowing in colors. And my soul was then satisfied … For the first time I understood that to paint is not what I see, but what I feel.”
The “subjective perception” of his inner world, as Zieglgänsberger stated in his commentary, was to become “visible”by means of lively painting. Thus Jawlenskymade a big step toward expressionism and this paved the way “that this art of expression” spread widely in Germany.”
Characteristic was also the encounter with the art of Paul Cézanne and Paul Gauguin. In a letter (June 1938) to Jan Verkade (a Benedictine painter monk from Beuron(Bavaria) and admirer of Gauguin)Jawlensky wrote at the time: “I understand that the artist with his art has to express through shapes and colors that which is divine in him. That is why the work of art is a visible God, and the art is the longing for God.” What Jawlenskyfound fascinating about Gauguin was his sense of colors, rhythms and color contrasts. Stimulating for him were also Gauguin’s confrontation with rural traditions and distant cultures, with Japanese art, his interest in the simple and natural. Equally important for him was the painter Henri Matisse who in his“Notes of a painter” stated that the “idea of the painting has a central role in the artistic work (…) everything else must be subordinated to it, in order to give a more permanent interpretation of reality.”
The Unifying between Russian and German culture
In a short address at the beginning of the Gala dinner the Chairman of the intercultural association HERUSDr. Alexander Farias e Castro in the presence of the Russian Consul-General (Frankfurt) made a brief reference to the current Ukraine /Russia crisis.He spoke about the need for a better “understanding of Russian history”, so as to better understands the psychological condition of Russia. This means understanding that which Farias called the “phantom pain”, which manifests itself in thought and feeling of many Russian citizens since the collapse of the Soviet Union. Farias referred to a short conversation which he had with a taxi driver in Moscow who told him that “the Russian Tsars needed 500 years to build an empire. It took five years for former Minister President Gorbatschow to destroy this.” The West, Farias said, has not taken this psychological condition into sufficient account. This includes Russia’s reaction to the NATO expansion up to the borders of Russia, which must be seen together with their reaction to the debate about deploying a US missile defense system in Poland.
Farias made clear that since Catherine the Great the Crimean has belonged to Russia, and that 65% are of Russian origin there. He similarly pointed to the “Russian” tradition in the Donetsk region and spoke about the very precarious financial situation of the Ukraine, which is in acute need of 36 billion Euros. So far only the US has promised to give 1 billion Euros. The Russian Consul GeneralRuslanKarsanovspoke about the speech of Russian President Vladimir Putin March 18, which gives“answers open questions.”He emphasized the “uniqueness” of the special anniversary exhibition commemorating the Russian Painter Jawlensky and combined this with the desire to also bring this exhibition to Russia. “What binds Russia and Germanytogether is the 1000 year old culture which is reflected in the great works of poetry, painting and music of both countries.” The vice president of the cultural association HERUS,at present also chairwoman of the German Pushkin Society,Dr. Clotildevon Rintelen,presented to the guests the extraordinary book “The Russian Church in Wiesbaden as a symbol of solidarity” which HERUS has published in late summer 2013.