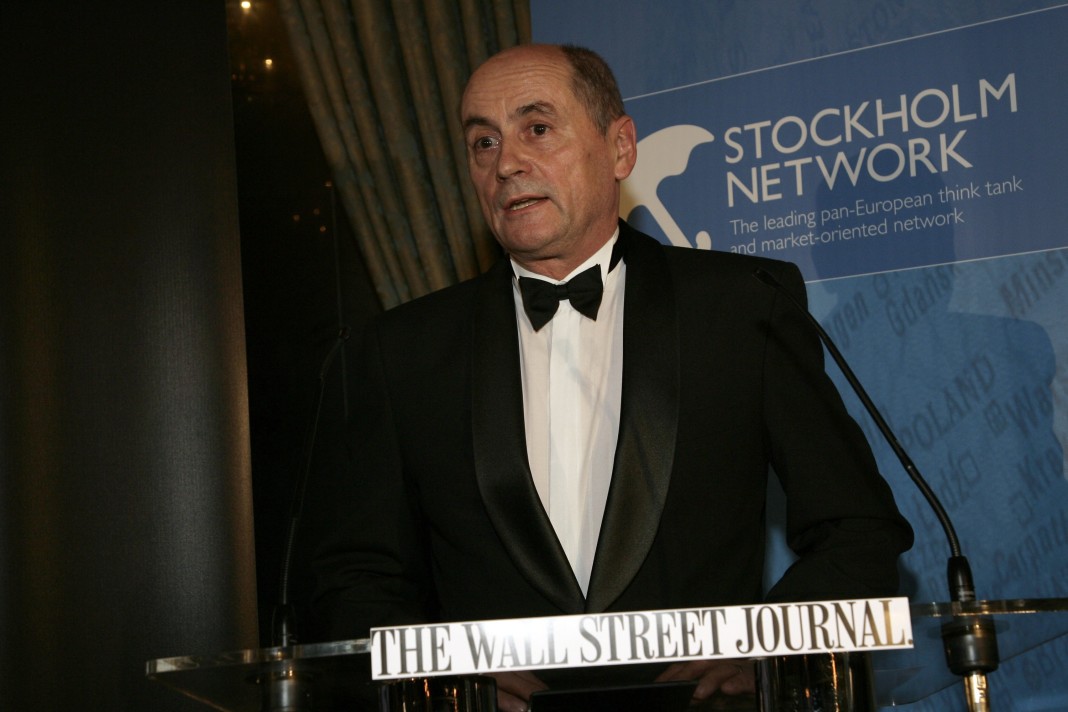 Presidential Elections in the Slovak Republic 2014.

On March 15 presidential elections will take place in the Central European Slovak Republic. 15 candidates are running for the presidential office, including – besides the incumbent Prime Minister Robert Fico (SMER- SD, social democratic direction) – the former Slovak Prime Minister and former Minister of Justice Dr.Ján Čarnogurský. If no candidate receives a majority in the first round, there will be a runoff on March 29 between the two leading candidates of the first round.

Presidential candidate Ján Čarnogurský is internationally known as a lawyer who during the period of communist rule stood up for the rights of dissidents. He was one of the leading organizers of the “candle demonstrations” March 25 1988. At that time thousands of people demonstrated for greater religious freedom and human rights. Today the 25th of March is officially celebrated in Slovakia as day of struggle for human rights.

Among the many awards which the candidate received during his life was the “Adalbert prize for Peace, Freedom and Cooperation in Europe” which Ján Čarnogurský received June 2011 in Warsaw (Poland). The Adalbert Prize was initiated by the Adalbert Foundation (Krefeld, Germany) after the breakdown of communism. Since then the award every two years was given to important personalities in East – and Western Europe, who have been engaged in the integration between East- and Western Europe and were fighting for deepening and maintaining of good neighbourly relations between the Western, Central and Eastern European nations. Among the prize winners in the last years were the former Polish Foreign Minister Władysław Bartoszewski, former German Chancellor Dr. Helmut Kohl and former Vienna Cardinal Franz König.

The award ceremony 2011 took place in the private residence of the Polish President Bronislaw Komorowski (Palais Belvedere in Warsaw). At that time the prize winner was presented by Polish Archbishop Emr. Henryk Muszyński as “one of the initiators who organized a Christian democratic oriented opposition movement against the communist regime.” Despite personal sacrifices such as his exclusion from the Slovak lawyer association, Čarnogurský fought for the civil and human rights, religious freedom and the self determination of the church, Muszyński emphasized. According to the Archbishop he “was engaged in building a democratic culture in his country and he was always very interested in keeping open the relations between Central Europe and Russia.”

The long standing companion of Ján Čarnogurský, former Prime Minister Tadeusz Mazowiecki, recognized the prize winner as “a politician, jurist and thinker, whose political actions are deeply rooted in Christianity.” He praised his excellent polish language capability and called him a very close friend of Poland. Similarly Polish President Bronislaw Komorowski expressed his personal sympathy and affection towards Ján Čarnogurský pointing to the prize winner’s “political engagement” and the “symbolic significance of St. Adalbert” (956-997), the “patron saint of Poland and symbol of the people and their relationships to each other.”

In his acceptance speech Čarnogurský reflected about the life of St.Adalbert, by qualifying his vita as “two expressions of Christianity”: Byzantine Christianity in the East and Roman Christianity in the West. He also underlined that in the past centuries “Europe has never been as peaceful as it is now.”

Ján Čarnogurský was born during the war in 1944. He studied law at the Charles- University in Prague and at the Comenius University in Bratislava and wrote his doctoral thesis about the “anti- Jewish legislation of the Slovak State 1939-1945”. From 1971 he began to work as a lawyer. The candidate is married to Mrs. Martha Čarnogurska, a prominent civil engineer. He has four children and 8 grandchildren and is a devout Catholic. In his electoral platform he underlines the central role of the family in society, stressing that “the family is the core unit of society.” He also warns that humanist values such as “kindness, honesty, humility and love do not fall into oblivion for us and our children.”

Throughout his life Ján Čarnogurský has worked as an advocate and defender of the rights of the weak and poor. Because of his defense of dissidents who were humiliated under communism he was prohibited by the communist regime to further consult as a lawyer. In 1988 and 1989 he together with František Mikloško and other Roman –Catholic dissidents organized the famous candle demonstrations in Bratislava, in order to fight for more religious freedom and human rights. It was a powerful symbol of spiritual resistance against the communist regime and it was totally non-violent. On November 17 1989 Ján Čarnogurský was thrown into jail from which he got released November 25. After the breakdown of Communism in Eastern Europe he organized the Christian Democratic Party KDH, which he chaired from 1990 to 2000. From 1991-92 he was Prime Minister of Slovakia and from 1998 to 2002 he served as Minister of Justice in his country – always remaining sensible for defending human and civil rights of people also in other countries. Since several years he is working as an independent lawyer in Bratislava.

In his electoral program Ján Čarnogurský underlines why he wants to be president of a country which has 5,5 Million inhabitants: “I want to be president of all citizens, with no difference in terms of race, gender, sexual orientation or nationality.” At a time where the attack against the weak and defenseless people is almost becoming fashionable, Čarnogurský declares that he wants to protect the rights and interests of these people. Given the gradual change in values in respect to ethics, morality, faith and family issues – especially in younger people, it is important for Čarnogurský “that we detach ourselves from the hectic of everyday life and reflect more about the importance of values such as love, goodness and the well- being of the others.”

A particular problem which the presidential candidate wants to pay attention to is the fight against poverty. There are some regions in Slovakia (especially in Eastern Slovakia) where half of the working population only receives an absolute minimum wage- a totally unacceptable situation, as Čarnogurský states. He demands an increase in wages and the free allocation of medicine for pensioners. He also calls for government support for a family friendly housing program, especially for young families.

In a country whose main industrial production is located in the automotive, power generation equipment, metalworking, mechanical engineering, chemical industry and automobile production, Ján Čarnogurský sees a particular challenge in fighting  unemployment , which currently stands at about 14,4% , while  youth unemployment is at about  30%. “The basis for a better life in Slovakia is the production of goods and services”, he writes in his electoral program. The candidate proposes to build some kind of national economic agency, which would direct foreign and private capital primarily into those regions with the highest unemployment rate. He also wants to initiate a law for promoting economic growth as precondition for wage increase and job creation.

Support for the candidate

Among the many supporters of his candidacy there are people like Ing. Joseph Kučerák PhD, former Vice Prime Minister (1990-91) who recalls the time in government with Prime Minister Čarnogurský. He at that time, as he recalls, was not a newcomer but “a mature statesman with a wealth of knowledge, sober judgment, well informed about the developments in Europe and enriched by the bitter experiences within the dissident movement during the years of communist dictatorship.  Kučerák calls Ján Čarnogurský “a visionary” acting in the interest of Slovakia as part of a United Europe. An equally important supporter is Paul Koncoš, Chairman of the Party of the Democratic Left (SDL) from 1998-2002 and Minister of Agriculture of the Slovak Republic, in1994. Koncoš refers to Ján Čarnogurský  as a politician with a high degree of responsibility for the fate of the Slovak Republic  and in its relations with the EU, Russia and Serbia.