I hesitated for a long time whether I should publish this article. It turned out to be quite harsh. But the unfolding multilevel global crisis―economic, and for many civilizational, leading to regime and elite change―convinces me that we must speak bluntly. We live in a military situation, so far without millions of direct victims, so “à la guerre comme à la guerre.”

I shall concentrate on the ideological footing of Russia’s policy.

Much is being done right in this respect. Russia firmly defends its interests and its truth, including the meaning and significance of the Great Victory in World War II. Russia debunks fierce, often morally foul, campaigns regularly launched against our country by the West which is losing historical competition. Using the resources left over from its bygone dominance, the West is trying to put up a desperate rearguard fight in the economic field (the U.S. trade war against China, sanctions against Russia and dozens of other countries) and in the information field (the propaganda war against Russia and China).

But the Russian approach has one critical weakness. We constantly rebut, thus playing on the proposed field. Out of habit inherited from the previous Cold War and the West’s dominance, we still pay too much attention to it. We have long stopped losing. We are no longer as poor and unfree as we used to be. But still we stay on the defensive.

Being on the defensive in the ideological sphere is quite consistent with the Russian strategic tradition: before winning, we surrendered Moscow to Napoleon and fought off Hitler all the way down to the Volga. But from whom are we defending ourselves now? From pygmies compared to those monsters. The defensive tradition is inappropriate in the modern world, for it leads to the loss of the drive in both elites and society. And there can be no victories in Russia without such drive.

We do not have a positive ideology for ourselves, no new Russian idea. But without such ideas all great powers collapse or cease to be great. The world is strewn with their graves and ruins.

The death of old communism and the unfolding failure of “democratic liberalism” have created an ideological vacuum in the world, and a struggle is underway for the right to fill it. It is difficult for China to do that because of its specific culture, which is difficult to “read” by most other civilizations. (Although it is critically important to try to understand it, just like the East in general.)

The fight between liberalism and communism has given way to a different ideological struggle today.

One side in it can be notionally named “nationalists,” or “conservatives,” or “normal.” They call for preservation of peoples’ and countries’ sovereignty, national identity, and protection of national interests and culture. They make up the vast majority, especially in rising Asia, and there are many of them in the U.S. and European countries. But until recently, they were on the defensive against the dominant liberal “political correctness.”

The other side is represented by transnationalists, or liberals. But they do not stand for genuine liberalism, that is, freedom, and have tried instead to impose a semi-totalitarian, unified ideology. They are a declining minority. But they have powerful, albeit shrinking, positions in the global economic system created at Bretton Woods and expanded to the entire world after 1991. Their positions, built up over the past few centuries, are very strong in the information-cultural sphere, which is perhaps the main defensive bastion of the West.

One factor that plays into the transnationalists’ hands is that the mentality of a significant part of Western (and a small part of non-Western, including Russian) societies and elites has changed due to the long peace ensured by nuclear weapons, the absence of stress (which permeates the entire history of humankind), the need to fight for the primary needs such as life, bread, one’s culture and homeland. Similar changes preceded the fall of the Roman Empire, the Republic of Venice at the end of the 18th century, and China’s catastrophe in the 18th-19th centuries. In the modern world, we can see the spread of bogus ideologies, values, and behavioral models: democratism as a religion, LGBT, Me Too, feminism (not to be confused with women’s rights), Black Lives Matter, and the like.

These behavioral patterns and values are promoted by ruling transnational elites to distract people from unresolved and neglected problems―the utter futility and injustice of the existing model of capitalism. They are used to atomize societies, replace natural values and emotions, and promote the transformation of humans into robots with programmable reactions. In fact, this is dehumanization of humans and humanity. They are trying to export these models in order to weaken competing countries and societies, and separate peoples from their history, traditions, and themselves.

This export evokes a negative reaction among those relatively “normal,” who are the vast majority. But they are not organized ideologically and lack leaders. So instead of thinking about how to justify the lack of gay parades, we should try to lead a new humanism in order to preserve man’s essence and purpose which is to serve the family, society, one’s own country, the world, and God. These are the true values of all civilizations and religions, except the one that is called liberal.

The threat of global war is extremely big and growing. Russia is the main provider of peace. It is Russia’s military-political deterrence that blocks the way of those who unleash these wars. When Russia’s active deterrence stopped because of military, moral and political weakness, NATO gang-raped the remains of Yugoslavia, aggressions were committed against Iraq and Libya.

But we do not capitalize on this real achievement, do not pursue an active policy of peace or peace-saving, and do not help ideologically ourselves and humanity to reduce the threat of global war.

Do we need armed forces just to deter “potential aggressors” and to securesovereignty, or, above all, to guard the highest value―peace for ourselves and others? I think we need the latter. Then why do we not say it straight to ourselves and the world, and thereby secure well-deserved authority and self-respect? Not to mention additional public support for defense spending, which is never amiss in time of economic crisis.

Having deprived the West, including the United States, of its military superiority, on which its five hundred-year dominance in politics, economy, and culture was based, we have liberated the world and created conditions for all nations to choose freely their own way of development and given them a chance to get a fair share of world GNP. In the past, Europeans and then Americans siphoned it off for themselves, relying on their dominance. But we are shyly rebutting accusations of militarism and aggressiveness, instead of saying that we are a country that has liberated the world not only from the descendants of the Genghisids, Napoleon, and Hitler, but also from the Western, or neoliberal, “yoke.”

A separate question is why a country that is a net exporter of clean air and water is modestly keeping silent on environmental issues. Apparently, because we are habitually on the defensive against the partially reasonable, but also egregiously selfish, green agenda pushed forward by the West. Instead we can and should set the tone in international environmental policy and propose its concept, beneficial to everyone.

Do we not know that democracy is an outwardly comfortable way of governance for the majority, but completely unsuitable during a crisis? And that it has always perished in such situations? Do we not see what formal democratic procedures lead and will lead to in poor states? The answers are all around: Ukraine, Armenia, Belarus, Kyrgyzstan, and many other countries. And their number will increase amid the global economic crisis spurred by the pandemic.

Authoritarianism is not a panacea and can lead to stagnation and failure. We know that. But democracy in poor, ethnically complex societies almost always leads to degradation or maybe even to bloodshed.

Do we consider ourselves morally equal or even inferior to our neighbors in European civilization who are drowning in lies and failures? Or do we finally recognize ourselves as what we have historically always been and are―a Euro-Asian, perhaps, civilization of civilizations?

The conclusion is quite obvious: we must fight back. Offering another cheek is senseless, especially to those who are in a deep civilizational crisis. But we should stop essentially defensive battles with historically losing nations, and should turn to a new, increasingly non-Western world, gaining advantageous and sometimes leading ideological and political positions it offers us.

Let me give just some ideas for such an offensive, future-oriented and by no means aggressive policy.

We are a nation of the victors.

We protect sovereignty, identity and freedom for all countries to choose their own cultural, political, and economic path of development. We are for the freedom of countries and peoples and against hegemony in politics and economy, and universalism in culture and ideology.

We are an internationalist people and we cannot be anything else, given our history. All kinds of racism are deeply alien to us.

We respect everyone’s personal intimate choices. But we want humanity to develop and children to be born, and we are against the transformation of people into mankurts who do not remember their history, kinship, and gender. We want people to continue to pursue their ultimate purpose which is to serve the family, society, country, the world, and God, if they believe in Him.

We are a nation of feminine and very strong women who have many times saved our country throughout its arduous history. And we are a nation of strong and brave men who are ready to protect the weak.

Russia should make way to a new world, without spitting at the old one, which is pulling back, but offering itself to Eurasia and everyone else as the leader of the normal, national, sovereign, and peaceful. After reading this, many will say: we are not quite like that yet. But we are and more so than many others, and we must move forward, enhancing the best in ourselves, and by so doing captivate others.

//The article was originally published in Russian in Rossiiskaya Gazeta, Federal issue # 268(8322) 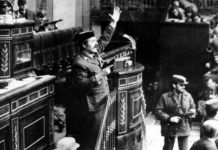