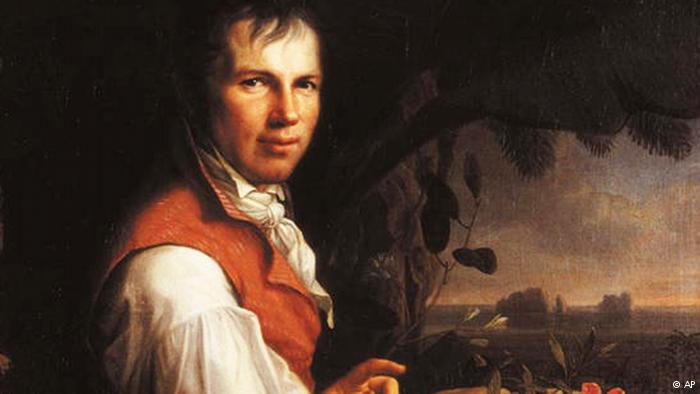 The German natural scientist Alexander von Humboldt (1769- 1859), brother of the famous language researcher Wilhelm von Humboldt, has written throughout his life an immense oeuvre. It consists of detailed descriptions about the physical topography of South America, Central Asia, and of China (even though he personally had never been there). He conducted many field studies in biology, physics, geology, mineralogy, volcanology, oceanography, climatology, astronomy, ethnology and economic geography.

Very influential for his work were the three expeditions which he made to South America (1799- 1804); his Russia expedition 1829 as well as his 20 years stay in Paris, where he developed an intensive network of scientific contacts. His essay “Essai sur le Royaume de la Nouvelle Espagne” had a significant influence on the South American Independence movement. When Humboldt died in July 1859 he was called by Benito Juarez “Benmérito de la Patria”, while in Germany he was called “the second discoverer of the Americas”.

The following essay “China in Alexander von Humboldt’s description of the Earth” was written by the Japanese Germanist, Professor Naoji Kimura.  It got published in the 15th edition of the Chinese- German Journal “Literaturstraße” at the end of 2014. The Journal itself is exemplary for the fruitful dialogue which has developed among Asian scholars, German Philologists like for instance Prof. Naoji Kimura( Japan) and his very good friend, the Chinese Germanist and translator, Professor Zhang Yushu who made acquaintance with  Kimura in 1985 in Bad Godesberg (near Bonn)  and introduced him at that occasion to the Senior Byong-Ock Kim from Seoul( South Korea). A very intense dialogue and friendship developed between the three scholars, which was accompanied by international congresses on German Philology in Beijing, Japan as well as in Berlin (1991). In 2001 the Chinese Professor Zhang Yushu founded the Journal  “Literaturstraße”; member of its scientific board is Prof. Naoji Kimura. Prof. Zhang Yushu is known for having translated the works of Friedrich Schiller, Johann Wolfgang Goethe, Heinrich Heine and Stefan Zweig and he has influenced a whole new generation of young German Philologists  in China.

The author of the following essay, Prof. Naoji Kimura belongs today to most outstanding Goethe- and Humboldt researchers. He has translated many works from Johann Wolfgang Goethe, in particular his natural scientific works into Japanese language. Since many years he is translating the very large oeuvre of Alexander von Humboldt.

Kimura began to study German in the year 1955 in Japan (Tokyo); he finished his study in 1963, having also spent some time for his studies in Munich. He then became assistant professor at the Sophia University Tokyo and after that ordinary professor for German philology. In the following years he became quite engaged in German philology and concentrated his studies on the work of Goethe. From 1977 till 2008 he was -with a few interruptions- lecturing as guest professor Japanese Language and Culture as well as for German philology at the University of Regensburg. He was co-publisher of the year book for International German Philology, vice president of the Japanese Goethe Society and member of the board of trustees of the German-East Asia Science forum in Baden-Württemberg and he is a corresponding member of the German Academy for Language and Poetry (Darmstadt).

Given his outstanding efforts for the German language Prof. Kimura has received several awards: Among them the Goethe award by the Japanese Goethe Society (1977); the Philipp-Franz von Siebold award (1982 by the Humboldt Foundation); the First Class Order of the Federal Republic of Germany; the Goethe Medal by the Goethe- Institute Munich (1996) and the Golden Goethe Medal by the Goethe Society in Weimar (2003). In the year 2003 he received the Jakob- and Wilhelm Grimm award by the DAAD (Deutsch -Akademischer Austauschdienst). Since 2003 he is Vice chairman of a cultural scientific Institute (INST) in Vienna.

In the following essay  ( China in Alexander von Humboldt’s description of the Earth” Kimura demonstrates that Alexander von Humboldt – although he has never been personally in China, nor having had the chance to directly study the country and its people- nonetheless had an astonishing and precise knowledge about Chinese topography. In 1829 upon invitation of the Russian Tsar, he began his Asia trip, which brought him via Western Siberia to the border of the China, which he was able to cross, briefly visiting the Mongolian Post Baty. He was very much interested in mountain ridges from Central Asia between the Golden Mountain or Altai and the Kuen–lun, from the Chinese wall till the Tian –Shan mountains (celestial mountains) and beyond toward the Aral Sea.

In his “Ansichten der Natur” (views of nature)- he very much paid attention to the various aspects of plant life, landscape painting, nature feeling and horticulture, above all he directed his attention to the knowledge concerning the history of nature of China. Kimura demonstrates in this essay as well as in others, entitled “Alexander von Humboldt’s geographical interest in East Asia”, as well as “Alexander von Humboldt as early exponent of Sinology”, that Alexander von Humboldt was an early exponent of Sinology. He was in correspondence with the famous French Sinologist Jean Pierre Abel Rémusa (1788-1832)  who had written an “Essai sur la langue et la litterature chinoise” (1811)  and who became  the first professor for Sinology in France.

Kimura shows that Alexander von Humboldt in his main oeuvre “Kosmos” describes many aspects about China. His attention focused on the country and the people, and on the migration of peoples from Central Asia to the Americas.

As Kimura states in one of his essays, Alexander von Humboldt must have studied the travel report written by the famous Venetian Marco Polo (13th/14th century). The work of Marco Polo, who was correctly called the “First discoverer of Asia  for the Occident”,  having travelled from Central Asia, via Persia to Mongolia and returning back home from Northern China, also had an influence on Christopher Columbus who personally had an edition of Marco Polos Travel Report. What Polo described about the Chinese Empire, being a state of Culture, at that time attracted a lot of attention from the Europeans.