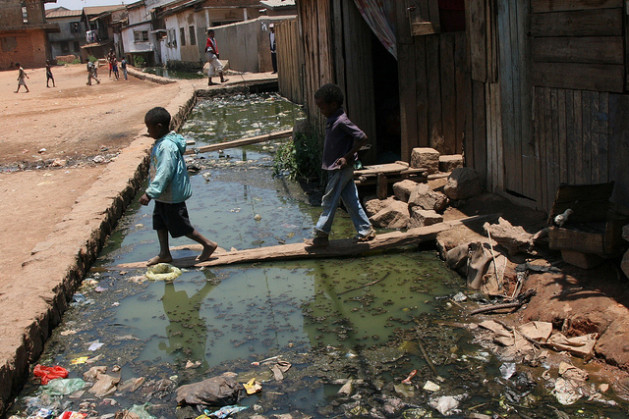 UNITED NATIONS, Nov 16 2013 (IPS) – The United Nations has a longstanding tradition of commemorating political milestones – like the abolition of the slave trade – or sustaining day-long vigils on controversial issues such as a ban on nuclear tests.

But for some unaccountable reason, the United Nations continued to sidestep a growing problem facing over 2.5 billion people: lack of adequate sanitation.

So last July, the 193-member U.N. General Assemby (UNGA) adopted a resolution, initiated by Singapore, to declare Nov. 19 “World Toilet Day,” the first-ever in the 68-year history of the United Nations.

“The name is catchy and humourous,” says the statement by Singapore, “But it serves to capture the public’s attention, and focus on the challenges of sanitation and toilets.”

The resolution, which was co-sponsored by 121 member states, calls for greater attention to the global sanitation crisis through the commemoration of World Toilet Day next week.

Asked why sanitation has remained a neglected goal in the U.N.’s development agenda, Mark Neo, deputy permanent represent of Singapore to the United Nations, told IPS sanitation was not originally included in the Millennium Development Goals (MDGs) and was agreed upon in the 2002 Rio+10 conference in Johannesburg, for inclusion.

“More importantly, sanitation is not just about toilets and infrastructure, it is about social and behavioural changes which cannot be achieved overnight and will take time,” he said.

Despite these obstacles, much progress has been made. Since 1990, 1.8 billion people have gained access to improved sanitation, and the number of people who practice open defecation has been reduced by 272 million, he pointed out.

“However, the sad reality is that one billion people still practice open defecation and 2.5 billion do not have adequate sanitation facilities,” Neo said.

Against this backdrop, Deputy Secretary-General Jan Eliasson’s recent “Call to Action on Sanitation” and the consensus adoption of the resolution on World Toilet Day” are timely and useful in highlighting the need to make progress on the continuing challenge of sanitation,” he added.

“An environment that lacks sanitation and clean water is an environment where achieving other development goals is an impossible dream. The time to act is now,” he added.

In its campaign to help resolve the world’s sanitation crisis, the government of Singapore is partnering with the World Toilet Organisation (WTO), a Singapore-based NGO, founded in 2001, with 534 members, who are mostly local toilet associations.

WTO founder Jack Sim (known affectionately as “Mr Toilet”) will be at the United Nations to take part in the commemoration.

“When we were children, our parents told not to talk about (poo),” Sim told IPS. “This is a really serious problem. What you don’t talk about, you cannot improve.”

Fleur Anderson, head of campaigns at the London-based WaterAid, told IPS next week’s commemoration is not just the creation of yet another “U.N. Day”, but a strong sign that governments recognise that toilets-for-all is essential for saving children’s lives.

“We’ll certainly be working with others to use World Toilet Day to draw the attention of governments to the enormous scale of the problem,” Anderson said.

WaterAid will also be launching a report next week, jointly with the WSSCC and Unilever, highlighting the huge impact sanitation has on women’s lives and calling for a collaborative approach between governments, civil society and business to get the MDG sanitation target – halving the number of people without adequate sanitation – back on track.

Emma Pfister, manager of social media and partnerships at Water for People, told IPS it is not enough to keep throwing money at the problem and building more toilets.

“We’ve seen that this approach doesn’t work, resulting in wasted investment and greater challenges for the world’s poorest,” she said. “Our goal at Water for People is to ensure every family, school and clinic has sustainable access to an adequate toilet – and that means a toilet that continues to work.”

Officially observing World Toilet Day is a great step toward making sanitation a priority on the global agenda, Pfister noted.

“And while it helps to raise awareness and funds, we must also demand more effective solutions that result in lasting impact,” she said. ”We must change the way aid is spent and hold U.N. agencies, non-governmental organisations (NGOs), and governments accountable for their work intervening in people’s lives.”

Projecting into the future, Neo told IPS there is insufficient time left to achieve the MDG target on sanitation by 2015. At the current rate of progress, he pointed out, there will still be 936 million people practicising open defecation in 2015.

“Therefore it is important that sanitation features prominently in the Sustainable Development Goals (SDGs) and the post-2015 development agenda that follows MDGs.”

Economically, Neo said, poor sanitation costs countries 0.5 to 7.0 percent of their gross domestic product (GDP), while the gains globally from investing in sanitation amount to about 260 billion dollars annually.

WaterAid Chief Executive Barbara Frost told IPS that at the turn of the millennium, world leaders promised to halve the proportion of people living without access to a basic toilet by 2015. At current rates of progress, around half a billion people will have to wait another decade before they get this basic service they were promised.

“We can and should be doing better [because] it is basic services we are talking about that can transform lives,” she said.