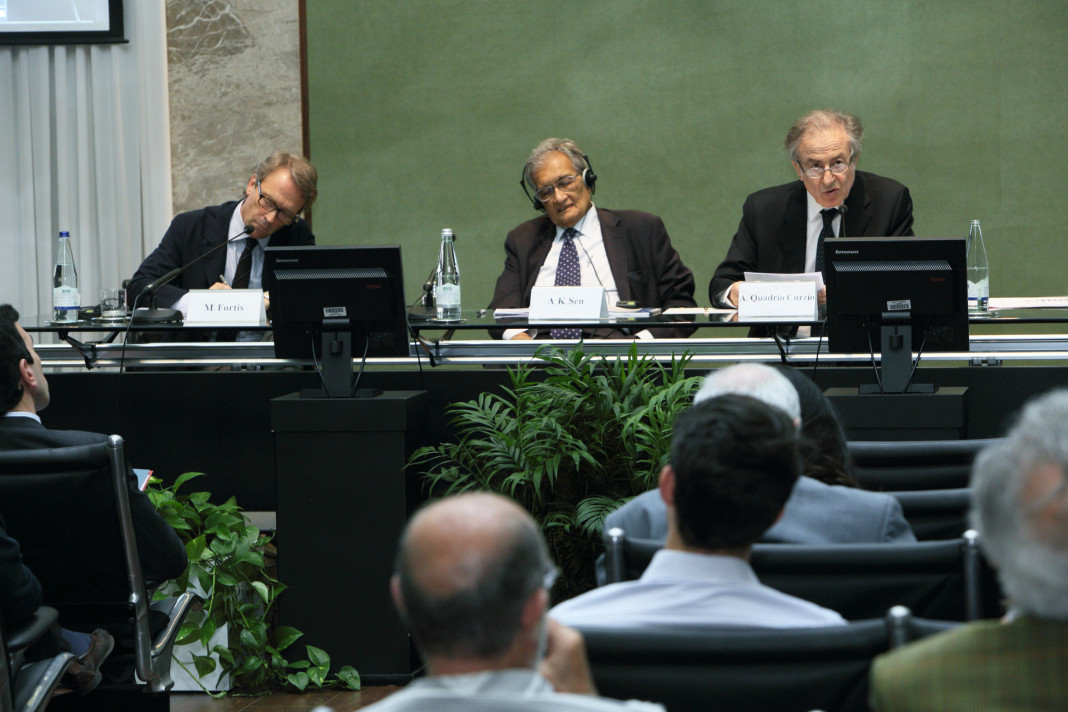 Abridged Version of a Talk to the Edison Foundation

FOOD, HUNGER AND FAMINE: HUMAN SECURITY IN THE CONTEMPORARY WORLD

The continuation of widespread hunger in a world – a world that is now much richer than it used to be – is a challenging problem.  We have to understand the causation behind the persistence of both endemic hunger – of varying intensity – from which a substantial proportion of the world population suffer, and the occasional outbreak of severe famines, killing a great many people and devastating the lives of many others.

The first thing to be clear about in understanding hunger and its persistence, is the need to see food deprivation as an economic problem rather than as a narrowly defined “food problem.”           More than four decades ago, in 1981, in a book called Poverty and Famines, I tried to use a concept that I called “food entitlement” to explain famines, but the same idea is relevant in understanding also the causation of hunger of different types – endemic moderate hunger and intermittent catastrophic starvation.

The basic idea of food entitlement is extremely simple and elementary.  Since food and other commodities are not distributed freely to people, their consumption in general – and their ability to consume food in particular – must depend on the basket of goods and services they respectively can buy (or otherwise have entitlements to).  In a market economy, the crucial variable is the amount of food a person can buy in the market, or directly own by having produced it in one’s own plot of land (which is particularly relevant for an owner-cultivator of food crops).  The presence of much food in the world, or in the country, or even in the locality, need not, in itself, make the problem of having food to eat any easier for a starving victim.  What we can buy would depend on our income, and that in turn would depend on what we have to sell (that is, the services we can offer, the goods we produce, or the labour power that we can sell through wage employment).  How much of food and other necessary commodities we can buy will depend on our respective employment status, the rates of wages and other remunerations, and the prices of food and other commodities we buy with our incomes.  Hunger and starvation, as I have tried to argue in my 1981 book, result from some people not having enough food to eat – it is not a characteristic of there not being enough food to eat in the country or in the region.

So a crucial variable here is the “entitlement set” of alternative commodity bundles which we can buy (or otherwise own). From that entitlement set, the family can choose any of the alternative baskets that are within its means.  The amounts of food in each basket determine what the family is able to eat, and that in turn determines whether the members of the family are forced to starve or not, or to go endemically hungry.

In a market economy, entitlements must depend inter alia on what resources we have, what our endowments are, which for much of humanity consist mainly – and sometimes only –  of our respective labour power.  For the relatively less poor, this is supplemented by the land and other assets we own, which we can either use directly ourselves for production, or sell in the market.  It must also depend on what opportunities the markets offer for our labour and for the goods and services that we can sell, and what the prices and availabilities are for the food and other commodities we hope to buy with the money we earn.   Whether we have enough food to eat, or are forced to go hungry, depends thus on our endowments and on the conditions of production and exchange, which together determine our entitlements.  If we are not able to buy enough food to satisfy our hunger, then we have to go hungry.  Hunger and food deprivation arises primarily from entitlement failure.

As was mentioned earlier hunger is not exclusively a “food problem,” and is really a feature of a general “economic problem,” and food entitlement difficulties can arise for many reasons other than food production difficulties.  And yet, it is easy to see, that the two are not divorced from each other.  How does food production relate to the concept of food entitlement?  Food production does act as one of the important influences on food entitlement.  Hunger and starvation may be substantially influenced by the lowness of food production.  For example, a peasant family may have to starve because its output collapses through, say, a drought or a flood.  In a different chain of causation, a family of wage earners may have to go hungry because food prices rise too much as a result of a crop failure.  To consider another linkage, people employed in agricultural production may have to face hunger or starvation if they lose their jobs through a curtailment of production.  Such an influence can originate in non-food agricultural production as well.  And yet, food and agricultural production cannot but be an important influence on food entitlements of people, and this influence can work through several distinct channels.  We have to take note of other economic processes going beyond food production, such as unemployment and fall in real wages, but we cannot overlook the importance of food itself.  It is a question of broadening our vision, not of replacing one narrow outlook (concentrating only on food supply) by another (ignoring the role of food supply altogether).

There are also other issues to be concerned about, including the distribution of food within the family.  The entitlement analysis in its elementary form talks about the deprivation of families, but to go beyond that we have to move from families to individuals.  Not every member of the family earns an income – infants don’t, very old people may not, and in many societies, women may do their work at home (sometimes extremely hard but unremunerated work too), but not be what used to be called “bread earners” – bringing in income from outside, in the market economy.  The condition of individuals within the family would depend on rules governing the distribution of food and care within the family.  Even though the market-based earners of the family may not be able to do their outside work and earn an income if they had to look after household work as well (including taking care of children and of the old and the sick), and even though household work is an essential ingredient of the process of earning an outside income, the social conventions in most countries of the world have tended to discriminate in favour of the so-called bread-earners and against those whose household work make that bread earning possible.

Entitlement analysis has to be, thus, extended to go beyond legal entitlements related to ownership, and to cover also such issues as the use of social norms and established conventions of sharing, which may determine who is accepted as having “entitlement” to what.  For example, the typical tendency in gender-biased societies to regard that women have less claim to attention within the family than men, or that girls are less entitled to good food – or good health care – than boys, shows the necessity of broadening the idea of entitlement from legal claims to socially accepted standards that could make some members of the family suffer more from deprivation than other members in the same family do.  These social conventions and norms in sharing food and other commodities demand scrutiny, and quite often, reasoned reform.

So hunger analysis has to take note both of economic determinants of food entitlement of families as well as the division of food within the family.  But we cannot stop there, without paying attention to issues of health care and education.  Undernourishment is not only a cause of ill health, it can also result from it.  To prevent persistent undernutrition attention has to be paid to health care, in general, and in particular to the prevention of endemic diseases that deter the absorption of nutrients.  The underdevelopment of public health facilities in many countries in the world, thus, contributes directly to the continued toll of widespread undernourishment.

There are sometime quite complex causal connections.  Recent medical research has brought out the long-run effects of maternal undernourishment, which not only ruins the health of the mothers, but can also cause serious health problems for the children who are born with low birth weight, since they are more prone to children’s diseases and – later on in life – also to adult diseases.  Indeed, low birth weight substantially increases the incidence of cardiovascular diseases later in life.  So the quality of maternal care and nourishment is a central influence in many parts of the world in the causation of widespread problems.

Also it is important to recognise that most deaths that occur during a famine are typically not caused by starvation alone.  People die mostly of standard diseases.  Starvation reduces the victim’s ability to resist illnesses, and the spread of disease in a famine is also helped by mass movements of population on search of food and by people’s attempt to eat whatever – rotting and polluted garbage and inedible objects – the can consider eating.

Finally, hunger and famines are influenced not only by economic and medical factors, but also by political systems.  This applies particularly to famines, which seem to occur only in authoritarian societies where there is no participatory political decision making, as in an operating democracy.  When a democracy functions, a government is too much under scrutiny and criticism to allow a famine to develop – and they are indeed very easy to stop, by creating extra income, for example through emergency public employment.  In contrast, a dictator can survive a famine through the use of its authoritarian powers.  The occurrence of famines is influenced by the operation of political systems, and they tend to be prevented by participatory democratic practices, with regular elections (threatening the ruler’s tenure) and uncensored newspapers and other media (spreading knowledge about poverty and starvation, and propagating politically powerful social criticism).  The idea of entitlements open up the door to many areas of concern.  A variety of economic, medical, social and political concerns have relevance to the continuation of endemic hunger and intermittent famines in the contemporary world.  We need a broad understanding of many causal linkages to be able to curb – and ultimately eliminate – the scourge of hunger in the world.