If you’re looking for good news about the global terrorist threat, this is it: the overall number of terrorist incidents worldwide, as well as the number of estimated casualties, declined in 2017 compared with 2016, according to Control Risks data. The essential drill down reveals the inevitable nuance. The decrease was broad but uneven, and multiple countries experienced increased terrorist activity because of shifting conflict and militant group dynamics.

The emphasis on the high-impact acts of terror carried out by Islamist extremists in Western cities, notably Islamic State (IS), has deflected attention from other ideological actors, especially right- and left-wing extremists, compounding the difficult and delicate challenge of detecting and responding to radicalisation. Furthermore, the convergence of ideological and personal motivations in violent attacks remains among the most challenging aspects of the evolving terrorism threat environment.

Fortunately, corporate responses, including insider threat programmes and workforce active assailant training, are relatively agnostic: they work regardless of the ideological motivation of extremists. However, the challenge for organisations continues to be finding all the dots and connecting them within the constraints of business ethics and the law.

The rapid collapse of IS-controlled territory in Iraq and Syria during 2017 drove down the overall number of terrorist attacks. However, an IS-inspired insurgency in southern Philippines intensified into a regional jihadist front, while the actions of the army in Myanmar turned the Rohingyas’ plight into a jihadist cause celebre. In addition, Islamist extremists associated with both IS and al-Qaida sustained a high operational tempo across the Sahel and Horn of Africa regions. Finally, IS continued to incite and inspire multiple high-profile attacks in Western countries, particularly in Australia, Finland, Spain, Sweden, the UK and the US.

Ethno-nationalist and Marxist guerrilla movements continued to define the terrorism threat in several countries. In Colombia, a decline in activity by the leftist guerrilla Revolutionary Armed Forces of Colombia (FARC) was offset by a surge in National Liberation Army (ELN) attacks intended to gain leverage in peace talks. In Turkey, a heavy-handed counter-insurgency operation against Kurdish separatists substantially reduced the frequency and severity of attacks in western cities. In India, Marxist insurgents remained an active but localised threat. In Thailand, the long-running ethno-religious Malay insurgency continued, amid fruitless peace talks.

Meanwhile, in Western Europe and North America, the scope and severity of right- and left-wing extremist attacks increased. Greek militant anarchists escalated and internationalised their anti-austerity campaign with a series of letter bomb attacks targeting banks, international institutions and politicians. In London, Paris and Charlottesville (US), right-wing extremists appropriated vehicle ramming as a tactic. Elsewhere in Europe, right-wing extremism tracked changes in irregular migration patterns. Control Risks recorded a sharp fall in arson attacks on refugee centres in Germany, while the number of anti-immigrant attacks increased in Italy.

Islamist extremists, ethno-nationalist insurgents and leftist guerrillas will remain the main sources of terrorist violence in most countries in 2018. But the fringes of a wider range of ideological movements appear to be embracing extremist violence. These include lone individuals accessing extremist ideology online but acting outside organised groups.

Right-wing extremist sentiment – focusing on anti-immigrant, anti-Semitic and ethno-supremacist themes – is increasingly overt in Europe and North America. This is reflected in the rising number of reported hate crimes, including vandalism and harassment, even in the absence of significant violent attacks. Left-wing extremists – chiefly in the guise of militant anarchist and anti-fascist groups – have also increasingly tolerated violence in reaction to government social, economic and security policies.

For both right- and left-wing extremists, online propaganda and social media allow individuals to participate in political movements without formal organisational ties. As with homegrown Islamist extremists, this has made the threat environment less predictable. Lone actors are less likely to come to the attention of law enforcement than organised groups, and their attacks are more likely to reflect personal motivations than a group strategy. In another parallel with Islamist extremists, rising public concern about these networks is reflected in increased voluntary and regulatory efforts to clamp down on both left- and right-wing extremist forums and propaganda.

The diversification of violent extremism also expands the geography and nature of potential targets. As Islamist extremist activity shifted towards less sophisticated homegrown extremists in Western countries, for example, it also shifted away from capital cities and other urban centres to smaller towns and local assets familiar to the attacker. Major cities are still targets, including for transnational terrorist groups, but they are no longer the main targets. This dynamic is likely to persist in 2018, as IS seeks to incite retaliation for the loss of its territorial ‘caliphate’.

As with Islamist extremism, lone actors potentially confound this traditional distribution of attacks. Two incidents in the US in 2017 are instructive. In June, a left-wing extremist travelled 865 miles (1,400km) to Washington, DC, to plan and conduct a shooting attack against members of the US Congress (federal legislature). In August, a right-wing extremist travelled 545 miles (875km) to Charlottesville (Virginia) to participate in a rally, where he conducted a lethal vehicle-ramming attack against counter-demonstrators in the city centre. (Unlike the left-wing shooting attack, it remains unclear whether the right-wing vehicle-ramming attack was opportunistic or planned.) In both cases, the long-distance travel to the attack location and unconventional targets suggest that lone actors at the extremist fringes of both right- and left-wing movements are expanding the range of potential attack scenarios.

Recent ideological extremist attacks also indicate an increasingly diverse portfolio of tactics, techniques and procedures. This has been extensively documented among Islamist extremists, who have adopted low-tech, low-cost tactics such as knife assaults and vehicle-ramming. Such attacks are more frequently executed successfully than those involving more complex tactics, even if the impacts are more localised and often smaller scale. As a result, they increased to nearly half of known plots and attacks in Western countries in 2017.

For both right- and left-wing extremists, arson (including both Molotov cocktails and timed incendiary devices) has been a dominant tactic over the last five years. Beyond arson, and in line with their differential target sets, right-wing extremists have tended to favour violent assaults and firearm attacks, while left-wing extremists emphasise sabotage and vandalism.

The FBI’s Behavioral Analysis Unit (BAU) recently conducted a study of lone-actor attackers, an in-depth examination of offenders from across the ideological spectrum. The study reinforced the notion that attacks often followed a trail of observable behaviours and escalation, with increasingly extreme views and hostile attitudes evident to those with whom they interacted. For the most part, ‘lone wolf’ attackers appeared to be drawn to extremism to express and legitimise underlying feelings of inadequacy, frustration, anger and hostility.

Just as important, the study found that an average of more than a year elapsed between the offender’s first involvement in an extremist cause and an attack, indicating an extended period of time during which intervention could have been attempted.

Going into 2018, preventing mass-casualty attacks and active shooter incidents at facilities globally continues to be a top priority for Control Risks’ clients. The shift towards low-tech attacks against public spaces has stretched traditional concepts of duty of care and operational disruption. In addition, the overlap between workplace violence incidents and threats involving radicalised employee insiders creates a more complex threat environment for companies and their employees.

There is no one-size-fits-all recommended intervention approach. However, ensuring that an organisation’s managers and security professionals have all available information pertaining to the threat posed by a potentially violent insider is critical. This reinforces the need for a multi-disciplinary approach to insider threat assessment and management from a corporate perspective – the hallmark of a mature and effective insider threat programme. Complex underlying issues pertaining to perceived harassment, as well as rights to privacy and religious expression in the workplace, require close collaboration between leadership from security, legal, human resources and information technology. A well trained and closely coordinated threat management team with representation from across these business functions enables an organisation to maximise its potential to initially identify emerging situations of concern, evaluate the totality of circumstances and devise a tailored threat-mitigation plan.

Well-developed mitigation plans will enable the organisation to better detect any behaviours that could indicate escalation towards a potential attack. Observations take on even greater relevance in the workplace, when supervisors are proactively engaged to be vigilant at earlier stages in the assessment process. Unlike casual and occasional observation by acquaintances, well-developed insider threat programmes create systematic and routine opportunities for recognition and reporting of pre-attack planning or preparation-related behaviours that might not otherwise be detected.

Such behaviours could include contextually inappropriate acquisition of weapons or escalation in target practising, preparation of a will or final message using an online platform, deletion or masking of certain social media content, or unusual travel or financial activity. They may provide a key behavioural indicator that an individual of concern may be progressing toward an attack. 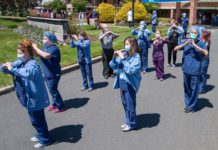