When Mesrob Mashtots arrived in Etchmiadzin with his alphabet, he was happier (in the words of his biographer Koriwn) than was Moses descending with the holy tablets from Mount Sinai. Truly, his invention of the Armenian alphabet in 405 A.D. marked the beginning of a new era for the nation and the people. If human language is one of the characteristics that distinguishes us as a species, each written script is what identifies us as a people. And the fact that Armenians were so fortunate to have a magnificent phonetical alphabet so early contributed to development in the cultural and religious realm, in literature and music.

The growth of a rich language culture, maintained and transmitted over centuries through manuscripts and printed books, has been a crucial factor in preserving Armenian national and cultural identity through centuries, despite conflicts, conquests, expulsions and even the threat of extinction through genocide. In 1512 Armenia was one of the earliest Christian nations of the Orient to print books, a fact commemorated 500 years later by UNESCO, when it named Yerevan world book capital.

In early manuscripts of the Bible and other religious works, the written word soon became the object of an art form, known as calligraphy. The graceful, elegant forms shaped by Mesrop as letters in the alphabet lent themselves to transformation into objects of beauty. From the earliest manuscripts to later printed books, calligraphy and illustrations became an integral component of literature. And the Mashtots-Matenedaran Manuscript Institute in Yerevan houses thousands of magnificent examples.

At Gallery 25 in Gyumri

In Gyumri, the cultural capital of Armenia, an important initiative is preserving this heritage. The project is called “Book Art & Calligraphy 2” and it opened on June 8 at the Berlin Art Hotel/Gallery 25. This is its second year. Financed by the Ministry of Culture and Sports of Armenia, it is organized and implemented by the “Für Armenien” foundation. The purpose of the initiative is to re-evaluate the role of the manuscript-book in Armenian life and it covers a variety of topics, the core of which is book art and calligraphy. Gallery 25, founded in 2001, includes 16 active members and artists, who organize exhibitions and events in the Berlin Art Hotel.

This year the events which lasted over several days, opened with an exhibition, entitled, “Archetypes”, featuring the works of Ararat Sarkissian, who is an Honored Artist of the Republic of Armenia. He created this series about three decades ago, presenting the alphabets of ancient peoples, including Assyrian, Urartian, Egyptian, Mayan, among others. Following the vernissage of the exhibition, the artist delivered a lecture-master class.

The next day, The Tale of Davit the Lad and Khandut the Lass was presented by the author Ararat Sarkissian and poetess Roza Hovhannisyan – the translator of the epic into Karno dialect, which is spokwen in Gyumri and the Spitak region. In the course of the conversation, the artist printed images from the epic on clay boards with the help of cylinders, an old technique he has maintained and developed.

On the third day of the project a master class on calligraphy and handmade postcards was held by Gyumri painter Vahan Topchyan. Those who participated were teenagers from the Gyumri and Vanadzor branches of the National Center of Aesthetics, Art School after Merkurov, and the A3 painting group of the Gyumri branch of the Fine Arts Academy. The youngsters crafted and illustrated handmade postcards, and took the opportunity to present questions to the artist.

The “Book Ode” open-air book art fair was held on the fourth day of the project. Contemporary writers from Gyumri displayed their own books, and various souvenirs related to the book and calligraphy were presented by the handcraft specialists from Yerevan and Gyumri. To conclude the series of events, painter and graphic artist Taron Saharyan delivered a lecture on the topic, “The Evolution of Armenian Writing in the Middle Ages,” reflecting the historical and cultural process in the transformation of writing and font formation.

The leit-motif of the initiative is that art can recover and preserve the identity embodied in language-culture, even though the civilizations and peoples concerned may have vanished from history, or been threatened with extinction. For artist Sarkissian this is the leading motivation for his extraordinarily creative efforts. “For me,” he has written, “the human experience, amassed during the course of thousands of years, is tremendously important.” (https://araratsarkissian.wordpress.com/). Memory, therefore, must be preserved, if identity is to survive. Certain crucial events threatening the destruction of Armenian cultural heritage had a decisive impact on him. When asked in one interview, what inspired his prints, he answered, “My main inspirations are old scripts, manuscripts and history. For example, in 2006, a whole grave of Armenian cross-stones was destroyed in Julfa. I was so sad that I couldn’t stop thinking about recreating them on paper. I sort of gave them a second life, and this is how I struggle to preserve my culture.” (https://www.homofaber.com/en/discover/discover-ararat-sarkissian) Another decisive event was the 1988 earthquake that devastated Gyumri, threatening to eradicate its identity.

To preserve this cultural testimony, Sarkissian explored and mastered techniques associated with the arts of the ancient world. For example, he learned to produce paper himself, as he explained in the same interview, from an artist he found in Jordan. Later he experimented with the technique, adding his own ingredients, like okra and Armenian herbs. He explained the importance of using such original techniques: “I firmly believe that the old techniques and traditions can be turned into something innovative. With my prints in various languages, maps, and cross-stones, I want to show that the old can be turned into new. We can’t read those scripts, but they can be an art piece to look at.”

Sarkissian’s work was presented at the 55th Venice Biennale, in the Armenian Pavilion which was not far from the old Armenian printmaking exhibition on Saint Lazarro island, and was the most memorable event he could cite. 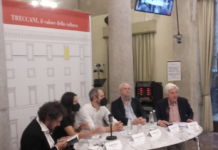 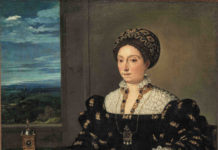 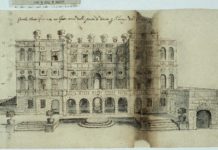